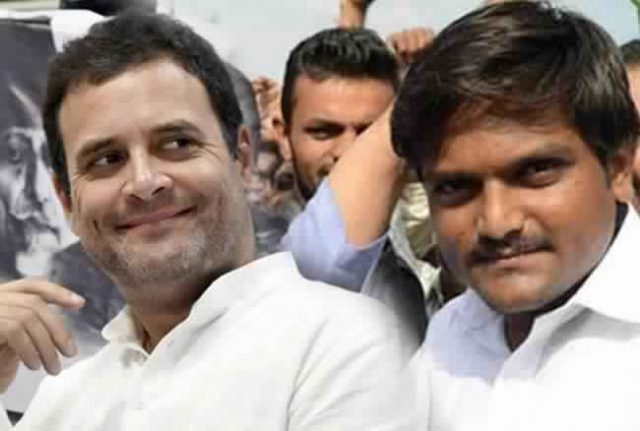 Will Rahul Gandhi’s Congress Commit To 125%? And Mortgage India’s Future?
By RKB

Will Rahul Gandhi win Gujarat with a promise of reservations for Patel’s?
A promise that is unlikely to be fulfilled considering Supreme Court rulings on the subject of granting more than 50% reservation!
And then there are the rest!
Patidars in Gujarat, Kapus in Andhra Pradesh, Gurjars in Rajasthan, Jats in Haryana, Marathas in Maharashtra
And now Muslims all over India!
How much will Congress concede?
And how much will all other parties promise?
And reservations for what?
Reservations for whom?
For college seats that are just not there!
For jobs that don’t exist!
For benefits that just cannot be passed on!
The grassroots infrastructure is so bad it’s pathetic!
We have IITs, Medical Colleges, but not enough primary schools!
Reservations in Colleges without primary schools is like a medical college with no Doctors!
But that’s been the Congress trademark all throughout!
IITs no primary schools
Medical Colleges no middle schools
IIMs no secondary schools
Toilets no water (and on some other day why did the BJP Govt not invest in biochemical toilets that would not require water?)
So what does Rahul Gandhi do?
Makes a deal with Hardik Patel, promises reservations!
Makes a deal with Jignesh Mewani, promises more reservations
Promises the Earth, Moon, Sky and the Stars!
Will it work for Rahul Gandhi and the Congress?
Looking at history of polls and poll promises many of the most outlandish ones have actually worked!
₹ 15 lakhs in each account by the BJP really worked
Wheat and Rice at ₹1:50 per kg really worked for NTR in the old Andhra Pradesh
Prices of 5 essential commodities to be maintained at 1995 level no matter what worked for Sena-BJP in 1995
So will reservations for Patels work?
Personally I doubt it!
Reservations for Patels implies a cut in the quota of other communities
Higher reservations for Dalits and Muslims implies the reservation cake will be divided further!
Congress does not have a Plan B for the backlash from other communities that is bound to come!
Agreed 22 years of the BJP has its own advantages for the Congress; but to attack GST, demonetisation and ephemeral scams is one strange way of campaigning.
Meanwhile in other states there are the Kapus, the Jats, the Marathas, the Gurjars and now Muslims!
Promise One, give in to One and the Rest follow!
So how much reservation will Rahul Gandhi ‘a Congress eventually promise?
125% ?
That’s right, one hundred and twenty-five percent?
In effect even the future of the country will be reserved for failure for all eternity?