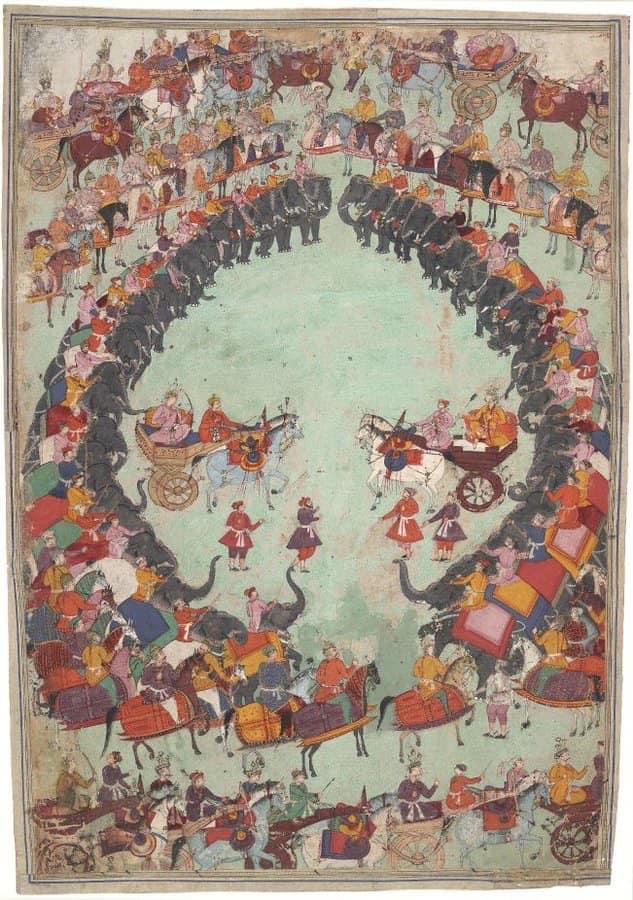 ♦️In 1582 an order was passed by #EmperorAkbar The Great to translate #The_Mahabharata into Persian.
♦️The Emperor called it “a Gift from God” (all the extremist Maulvis at Akbar’s Court were appalled; they cursed the Emperor and quietened down only after 3 of them were put to death by being crushed underfoot Akbar’s favourite elephant )
🇮🇳THIS IS MY INDIA
🇮🇳 ISN’T IT YOURS?
♦️The translation work of the Mahabharata, called Razmnamah (Razm : war Namah : Story) which has one lakh (100,000) Shlokas, was carried out during the period 1584–1586.
♦️Copies of the beautifully illustrated work were then sent out to select members of the Royal Family, Emirs, Governors and others close to the Emperor
🇮🇳THIS IS MY INDIA
🇮🇳ISN’T IT YOURS?
♦️Today a copy of this translation work can be found in the “City Palace Museum” of Jaipur. #Mushfiq contributed the paintings to this book. The speciality of this #Razmnamah is the paintings of the events of Mahabharata in the book.
♦️A copy of Akbar’s Razmnama is present in the pothikhana (House of Books) of the Maharaja of Jaipur.
♦️ #AbulFazl wrote the Preface for this Razmnama.
♦️In folio 11 of this copy Abul Fazl give the date 1588 (as per the Christian calendar from the original Hijr) The Jeypore RazmNamah, written by Khwaja Inayatullah on paper from Dowlatabad, contains 169 full-page miniatures with Names of The Artists
♦️Jaipur Razmnama has the seal of Akbar, Shah Jahan and Shah Alam. 169 episodes are illustrated in this manuscript. The artists of this copy were Basawan, Daswanth and Lal.
♦️147 illustrations of this Razmnama manuscript were reproduced in T.H. Hendley book Memorials of the Jeypore Exhibition in 1883.
♦️The second copy of the Razmnama was completed between 1598 and 1599. When compared with the first copy, the second copy is found to be more elaborate. the 161 paintings found in this copy provide illustractions of the Mahabharata.
♦️The paintings are examples of excellence of the artists of Akbar’s time. It clearly shows the patronage artists received during Akbar’s reign.
♦️The copies were sent to members of royal families as gifts to help them understand the Hindu religion better. According to Akbar’s courtier Abd al-Qadir Badayuni, Akbar ordered the copies to be sent to all the Amirs of his kingdom, with instructions to receive them as a gift from God. ♦️According to the preface written by Abul Fazl the historian in Akbar’s court, the intention behind these gifts and their distribution was very pious
♦️In 1574, Akbar started an Maktab Khana or a house of translation works in Fatehpur Sikri. He assigned the work to a few officials to translate the Sanskrit books #Rajatarangini, #Ramayana and #Mahabharata into the Persian language.
♦️Three editions are known, one made between 1584 and 1586 is in the Jaipur palace. and includes 176 paintings of which 147 were reproduced in 1884 by Thomas Holbein Hendley.
♦️Another made between 1598 and 1599 has pages spread out in collections across North America, Europe and India.
♦️A third was made around 1616-1617.
♦️Akbar’s court translations were made in several steps, it was explained by Hindu scholars and a gist was made by the Muslim theologian Naqib Khan into Persian and this was then improved upon by Faizi into elegant prose or verse.
🇮🇳THIS IS MY INDIA
🇮🇳ISN’T IT YOURS?

2nd Corona Wave In India Is China’s Revenge by RKB