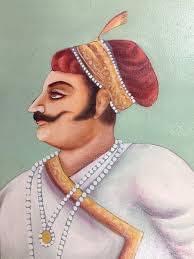 ♦️A very, very dear friend of mine just said that India has more to fear from the Jaichands opposing the #CAA #NRC and #FarmBills than the enemies abroad, somewhat erroneously; but then that’s the imagery which is being sought to be employed right now…
♦️And no, I am not discussing the Farm Bills here but I have always been intrigued by Jaichand
🥀So what happened to Raja Jaichand?
🥀Since his name is synonymous with traitor and all treachery
🥀And does treachery of the kind Raja Jaichand allegedly indulged in really pay dividends?
🥀Let’s see what happened to Raja Jaichand Of Kannauj..
(And this is what usually happens to Jaichands and Mir Jafars)
♦️One would believe that for staying away from Tarain (the second battle of Tarain when Ghori defeated Prithviraj Chauhan) he must have been justly rewarded by Mohammed Ghori, the new ruler of Delhi.
♦️If not anything else, at least some kind of alliance? A peaceful old age and long-running dynasty for sure?
♦️Jaichand, we must remember, ruled over a vast area, stretching from today’s Kannauj to Varanasi. Certainly, if his presence or rather absence decided the battle, he cannot have been an unimportant person.
♦️His kingdom included today’s eastern Uttar Pradesh and western Bihar, including the holy city of Varanasi. With the demise of Prithviraj Chauhan, Jaichand automatically became one of the most powerful rulers in north India.
♦️But Jaichand’s name is no longer found in history, and India’s history from 1192 takes a turn that’s somewhat different from what the Great Raja Of Kannauj was expecting
♦️Mohammed Ghori returned to his kingdom beyond the Khyber Pass, and left Qutubuddin Aibak to ‘settle matters’ in the newly conquered territories. He battled at Delhi and Ajmer, and finished the remnants of Prithviraj Chauhan’s army. Then he turned towards modern day Meerut and Aligarh, areas under the influence of Kannauj and Jaichand.
♦️Next in line was Kannauj itself! At this point, Mohammed Ghori once again descended from the Khyber Pass and joined Qutubuddin Aibak.
♦️Together, they attacked the King who had aided them just two years before! Jaichand, now fighting all alone and for himself, put on his armour and led his army out of Kannauj; he may have betrayed Prithviraj Chauhan but he was not a coward
♦️Somewhere in the region between Kannauj and Etawah, at a place called Chandwar (near modern Firozabad), the two armies clashed. A pitched battle was fought
♦️In the intervening three years after the battle of Tarain Mohammed Ghori had increased his army’s size manifold. Even so, Kannauj fought well and held her own until an arrow struck Jaichand in the face, and the Army Of Kannauj scattered seeing their King fall!
♦️Ghori won a great victory here too
♦️A contemporary chronicle, Tarikh e Firoz Shahi, states that Jaichand’s head was presented to Ghori and Qutubuddin Aibak after this battle. Jaichand’s son then prepared to defend Kannauj, but Mohammed Ghori instead made his way to Varanasi. The holy city on the banks of the Ganges was also an important financial centre for the kings of Kannauj.
♦️Pillage, rape and destruction of the city followed. Ghori also occupied the fort of Asni. It is said that Mohammed Ghori, at the end of this campaign, returned with a loot that had to be carried on 1,400 camels!
♦️As for Kannauj, it was once one of the principal cities of ancient India. Even at the time of Jaichand, it exerted considerable clout. Following his death, the kingdom shrunk to just the size of the city and merely a few years later, Iltutmish finished the remnants.
♦️Jaichand and his kingdom were destroyed, his family disappeared leaving his name forever to be remembered with loathing and derision; if only Jaichand and Prithviraj could have unitedly fought at Tarain…
🥀This is what usually happens to #Jaichands and #MirJafars