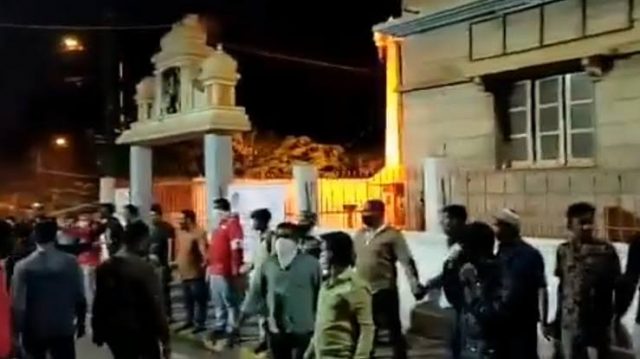 ♦️We just saw a Police Station in Bangalore set on fire because of a Facebook post about The Prophet Mohammed (PBUH)!
♦️It would be funny if it weren’t so tragic; 3 dead, crores worth of property destroyed over an abusive post on a Social Media platform foreign owned that probably got richer as the violence got more out of control!
♦️And the one lantern of Hope was the human chain formed by Muslim Youth to protect a Hindu Temple nearby from being damaged by a charged up mob (the one thing which ought to have been universally lauded but is being sneered upon as a publicity stunt by Lobotomised Lunatics who would rather see everything burn down in a communal conflagration than acknowledge and appreciate the good in each other)
♦️That cop station in Bengaluru didn’t have shares in Facebook
♦️The crowd of people (all Muslims) disturbed at the horrendously derogatory post didn’t own a single share of FB
♦️The Congress MLA whose house was also torched didn’t seem like the sort of guy who invested in FB’s parent company
♦️His estranged nephew, unapologetic author of the post, didn’t have anything to do with FB’s management either
♦️But they all had one thing in common
♦️They used an American owned platform to foment hate against each other (the Congress MLA is the only innocent party here) based on centuries of vicious, vile hatred against Muslims and Islam on the one hand and Hindus and their idolatorous religion on the other!
♦️I have searched and searched and searched
♦️There were NO Hindu-Muslim riots anywhere in India under Mughal Rule till Akbar the Second (not even in principalities and Kingdoms ruled by Hindus with a very large number of Muslims subjects)
♦️So what happened?
♦️I can’t simply say that this was a gift of the British to us (which it really was among many other things)
♦️It is true Hindu-Muslim tension was there always but it is the British who gave it a shape, identity and a classification!
♦️The whole classification of Indian history into Hindu Rule, Muslim Rule and Quasi Christian Rule was an invention of a Britisher James Mill !
♦️Mill wrote the monumental work The History Of British India
♦️He was the first writer to divide Indian history into three parts: Hindu, Muslim and British, a classification which has proved so surpassingly influential in the field of Indian historical studies that even now in India and Pakistan history is divided exactly along those lines leading to a major schism between Hindus and Muslims
♦️And this was used particularly to destroy the incredible unity between Muslim and Hindu that we saw in the First War for Indian Independence in 1857
♦️They faced a severe setback in 1857 when they witnessed the power of Hindu-Muslim unity and realised if this was allowed to consolidate there was no way the British East India Company could continue its looting ways in India
♦️General Bakht Khan marching towards Delhi, Rani Laxmibai bravely defending Jhansi, Maulvi Ahmadullah courageously leading from Faizabad, Babu Kunwar Singh from Bihar, Begum Hazrat Mahal valiantly shielding Lucknow…the entire revolt of 1857 was the portrayal of Indian culture wrapped in Hindu-Muslim INDIANNESS!
♦️The British soon realised the possibility of getting pushed out from the Indian Territory unless the unity is broken and people are divided.
♦️Hence, they gradually implemented their divisive agenda, “Divide and Rule” driven by economic and political rapacity which later on, snowballed into painful partition in the flames of which was jolted the essence of Hindustan
♦️According to Thomas Trautmann, “James Mill’s highly influential History of British India (1817) – most particularly the long essay ‘Of the Hindus’ comprising ten chapters – is the single most important source of British Indophobia and hostility to Orientalism”.
In the chapter titled General Reflections in “Of the Hindus”, Mill wrote “under the glosing exterior of the Hindu, lies a general disposition to deceit and perfidy”.
♦️According to Mill, “the same insincerity, mendacity, and perfidy; the same indifference to the feelings of others; the same prostitution and venality” were the conspicuous characteristics of both the Hindoos and the Muslims.
♦️The Muslims, however, were perfuse, when possessed of wealth, and devoted to pleasure; the Hindoos almost always penurious and ascetic; and “in truth, the Hindoo like the eunuch, excels in the qualities of a slave”. ♦️Furthermore, similar to the Chinese, the Hindoos were “dissembling, treacherous, mendacious, to an excess which surpasses even the usual measure of uncultivated society”.
♦️Both the Chinese and the Hindoos were “disposed to excessive exaggeration with regard to everything relating to themselves”. ♦️Both were “cowardly and unfeeling”.
♦️Both were “in the highest degree conceited of themselves, and full of affected contempt for others”.
♦️And both were “in physical sense, disgustingly unclean in their persons and houses”.
♦️And this is The Devil’s Advocate whose Hellish brew has been used as the base for teaching of history in the sub-continent; the catastrophic consequences of which are there for all to see!
♦️Rulers weren’t Hindu or Muslim; they were Rulers! Chandragupta, Kanishka, Ashoka, Akbar, Shah Jahan, Ranjit Singh did whatever was needed to be done to first grab power and then keep it!
♦️The 1857 War of Independence showed the British what Hindu-Muslim unity (actually INDIAN UNITY..to some extent) could do; naturally it had to be destroyed!
♦️And all of us became willing/unwilling pawns in a cruel game of my butcher killed more than yours!
♦️And our politicians from all over across party lines took a leaf out of the James Mill Book Of Hindoo-Muslim strife to keep the pot of communal strife on the boil
♦️And all of us became the dumb, driven cattle for the main course in a Vultures’ Lunch
♦️And we are still dumb, driven cattle!
♦️Will we give up our hooves and mashed potatoes for brains now at least?
♦️And realise the Establishment today are no different really from the Gora Sahebs who began the loot of this nation in right earnest after the Battle Of Plassey in 1757?

Indian Muslims Have Always Respected Shri Ram; There Are Over 300 Urdu Ramayanas by...