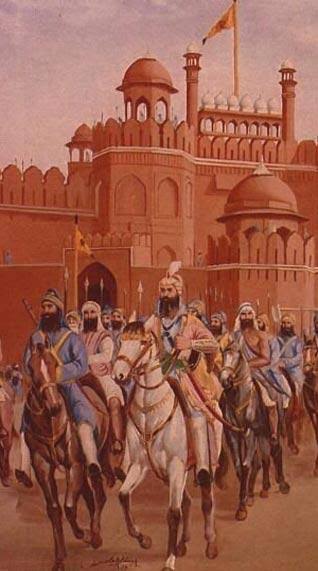 ♦️If you have ever lived in Delhi you must have heard of some places like #MoriGate, #TeesHazari, #Mithaipul , Gurudwara #MotiBagh (Nanak Pura), Gurudwara Sri Rajan Gani, Gurudwara Sri Bangla Saheb
🌹It was the year 1783 when Sikh leader #BabaBaghelSingh conquered Delhi from the Mughal king #ShahAlam. On 11th March 1783, the Sikh army marched into Delhi on horses and elephants and unfurled a #NishanSahib at Red Fort.
🌹Sikhs celebrate the day as Fateh Diwas, while the date as per the Gregorian calendar differs every year.
♦️Born in the 1730s in village Jhabal Kalan, Amritsar, into a Dhillon Jatt family, his forefathers had converted to Sikhism during the time of Guru Arjan Dev Sahib in the 1580s. Baghel Singh first invaded Delhi on January 8, 1774, and captured the area up to Shahdara.
🌹The second invasion was on July 17, 1775, when the Sikhs captured the area around the present-day Pahar Ganj and Jai Singhpura. Majority of the fighting took place where present-day New Delhi is located.
🌹Shortage of supplies forced the Sikhs to temporarily halt their conquering spree, but Red Fort was the final aim.
🌹On 11th March 1783, the Sikhs entered the Red Fort in Delhi and occupied the Diwan-E-Aam where Mughal emperor Shah Alam II used to hold his Large Darbaar in the tradition of Emperor Shah Jahan
♦️Emperor Shah Alam II reconciled with the Sikhs and offered treaty and accepted their terms, including construction of Gurudwaras on Sikh historical sites. Gurudwara Sis Ganj Sahib, where #GuruTeghBahadur had been beheaded on the orders of Emperor Aurangzeb and Gurudwara #RakabGanjSahib, where the Guru’s remains were cremated were established by him.
🌹He has also been credited with the establishment of Gurudwara #BanglaSahib, Gurudwara #BalaSahib, Gurudwara #MajnuKaTilla, Gurudwara #MotiBagh, Gurudwara #MataSundri and Gurudwara #BabaBandaSinghBahadur.
♦️The place where Baba Baghel Singh stopped with his troop of 30,000 men in Delhi, is now known as #TeesHazaari where Delhi’s Lower Courts stand.
🌹When the Mughal emperor got to know that the Sikhs are planning to attack Delhi, he ordered all the gates of the Red Fort be closed, especially the ones with access to the rations so that the Sikhs run out of food and go back.
🌹Some of the Sikhs, though, accidentally came across a mason who informed them about a part of the wall of the fort which had caved in, but the exterior was intact. The Sikhs reached the spot with the help of the mason and rammed logs of wood through the wall and entered. This place is now known as Mori Gate, (Mori, Hole or Tunnel) where the Inter-State Bus Terminus (ISBT) now stands.
🌹After conquering the Red Fort, the Sikhs distributed sweets near an Old Bridge…Which is now known as the Mithai Pul.
🌹Now why wasn’t I taught this in school? I remember the name of every major Mughal Emperor; why wasn’t I taught the names of major Sikh and Maratha Generals who fought against the Mughals and others?
🌹That’s history too; my history!