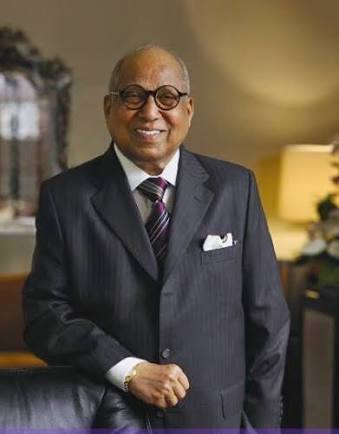 So it really is the end of an era! Two titans of Indian industry have passed away…Rusi Mody n Capt CPK Nair of the The Leela gp of hotels…
For us he was more than a friend, n came as close to being a famliy as it is possible…called himself Revathi’s( not Revati as her name is!) Krishna ( she is true-blue believer in the miracle of a saviour called Lord Krishna)…n used to tell her laughingly: “ask me anything n it shall be granted!!”
From Bleeding Madras( the iconic check shirts from southern India that took America n the world by storm in the 60s) to Leela Lace the company that provided to all big designer houses like Versace Armani ….and then to the first hotel here in Mumbai The Leela Penta Capt Nair founded it all! But it was always Leela, named after his wife as it was her father’s small-time garment business that he built up into a huge empire n never let himself nor anybody else forget it!
He was in the indian army in the maratha light infantry regiment ( the jungi palton he called it!), n till the time the reins were in his hand, all his businesses ran with a military precision. He had fought in the freedom Movement n personally knew Netaji Subash Chandra Bose ( tho he was never in the INA!),n the Frontier Gandhi Khan Abdul Khan Ghaffar …from whom he picked up a taste for ” yellow daal with fried onions!” Otherwise he was a ‘appams with mutton esstew’ man !
He would call up RKB when he was editing The Daily from the Adlon Hotel in Berlin ( it had been reconstructed), n RKB would ask him if he was in The Hitler Suite?? And Capt Nair would retort saying,” think of a better one, no I am in The Bismarck suite!”
Both he n Leela were frequent visitors to our house when we lived on Napean Sea Road in the late 90s, driving up in their iconic baby blue Rolls Royce ( silver angel on the bonnet…it was later parked in the porch of The Leela at Sahar)…
RKB even sat in with Capt CPK Nair on all ad campaign meetings of the hotel group….much to the dismay of the ad agency in question!!!
Once we shifted to Juhu, The Leela’s huge monsoon umbrella was a common sight outside the main gate of Jamnabai Narsee School, shielding his one n only grandson from the monsoon deluge! And his granddaughter Samyukta too studied there!
A true patriot, and an officer n a gentleman to the last….RIP Krishna…you lived a very meaningful n rich life!