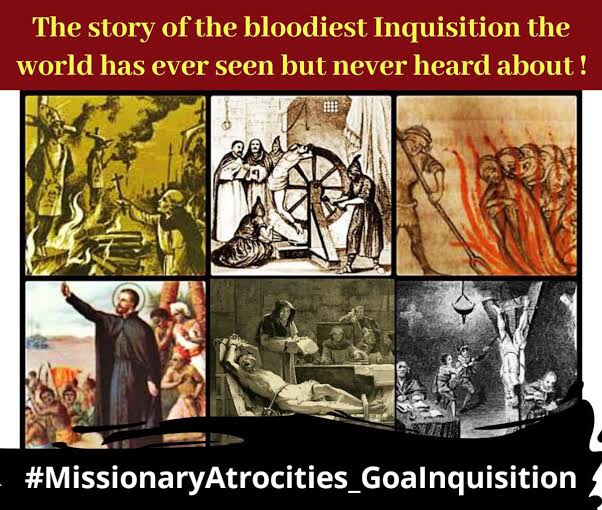 And this for THE PEOPLE OF PEACE….
Please do read how tolerant, how liberal and how full of love Christianity was first to the Old Roman Gods and then to the HINDOOS….

“However, the cruelest blow to the Pagans came in 529 CE when Justinian passed a law which forbade “… the teaching of any doctrine by those who labor under the insanity of paganism so that they may not corrupt the souls of their disciples.”

“This resulted in the closing down of the famous Academy of Athens, which was the house of learning in the land, who patron goddess was Athena, the Goddess of wisdom. This academy housed an unbroken thousand year old philosophical tradition starting from Plato was finally closed down. Philosopher Damascius, led the exodus of the other Philosophers out of Athens to Persia. He was in his sixties when this happened.

“Far away on the shores of Goa, between the 16th and the 19th century, the children of Saraswati endured a similar fate due to the laws enacted by the Portuguese Christians which forced them to migrate out of their homelands.
There is evidence of multiple proclamations by the viceroy starting from 1560, which would require Brahmins, Physicians and other members who were “prejudicial to Christianity” and “great impediments in the way of conversion” to move out of the Portuguese lands.
These people had a month’s time to dispose of all their property.
There were laws which prevented Hindus from performing their religious ceremonies in the Portuguese territory.
The order passed on January 31, 1620 read “In the Name of His Majesty, I order that as from the date of the publication of this order, no Hindu, of whatever nationality or status he may be, can or shall perform marriages in this city of Goa, nor in the islands or adjacent territories of His Majesty, under the fine of 1000 Xerafins…”.
Hindus were forbidden from anointing their foreheads with sandalwood paste and tilak.
In 1679, the Viceroy D. Pedro de Almeida permitted Hindus to celebrate marriages in their houses, but only behind closed doors, with armed guards standing outside the houses to prevent Bottos (Portuguese corruption of Bhats, who would officiate the marriage) of Hindu temples from entering the house for performing sacrifices or any other Hindu rites.
Christians who attended or watched such marriages would liable for punishment.
The thread-ceremony (Brahmopadesham) of young Hindu boys could only be performed outside the Portuguese territory.
The 3rd Concilio Provincial in 1585 in fact recommended that the King forbid the Hindus from wearing their sacred threads or from initiating their sons into wearing the sacred thread.
In 1680, an order was passed which prohibited Hindus from observing a ceremony of keeping a vigil on the 6th day after the birth of a child. Apart from this, there were laws which required that “all Hindus should come with thier families to places assigned for the purpose to listen to the preachings of Holy Gospels”

“There were laws, like the royal decree of 1582 which prohibited Hindus from entering public service. In 1591 a law was passed which emphasised that “no officials should utilize the services of Brahmins or other Hindus, nor enter the houses of the latter, nor speak or have dealings with the latter directly or through third parties, under the pain of being suspended from their offices”

“Further, the Hindu Gaonkars (original inhabitants of the village) of Salcette were stripped of their rights and previleges. Those Gaonkars who converted to Christianity were allowed to retain the same previleges.

“Apart from this there were laws such as the one passed by the controller of finances in 1541 which told the Hindus “that they should out of their free will, be prepared to give and donate the income of lands belonging to the temples ….. The income should in future be applied towards and donated to the chapels built in this island, and also to defray the expenses of the confraternity of the converts to the faith.”

“However the law, what led to maximum number of conversions was the one which required that any Hindu child whose father and mother were both dead had to be handed over to the Church to be baptised and indoctrinated by the clergymen. The earliest such law was passed in 1559, which was endorsed by the viceroy in 1564 and by the Governor in 1575. Those relatives who attempted to hide the fact that there was an orphan in the family or attempted to move such orphans out of the state were punished under law. Many a times children were taken away by force, even when both the parents were alive. This was a constant complain by the residents to the King of Portugal and one of the key factors for the dispute between the Portuguese and Chhatrapati Shivaji Maharaj. When such children were baptised, a share of the ancestral property automatically went to the children. Many a times, the surviving parent or the nearest relatives would also convert to Christianity in order to be with the child.
Thus, these laws ensured that the church caught hold of the Hindu kids at an early age and indoctrinated them, following which out of love for the kids, the remaining family members also converted.

“This carrot and stick approach was consciously adopted. Fr Alessandro Valignano who was the Visitor of the Missions, wrote, “As regards to the first duty, i.e., conversion of unbelievers, in these parts of India do not commonly occur as a result of sermons & doctrine, but is effected by other ‘just’ means such as:

“Obstructing Idolatrous practices & meting them just punishment
Refusing them favours which can be justly refused & offering them to those who are newly converted.
Honouring, assisting and protecting the latter in order that others might thereby get converted.”
Among the various weapons in the proselytizers’ toolkit, by far the most effective one was law.
And today we call them the People Of Peace
We are an amazing people; we begin to love and admire the very people who persecuted us the most