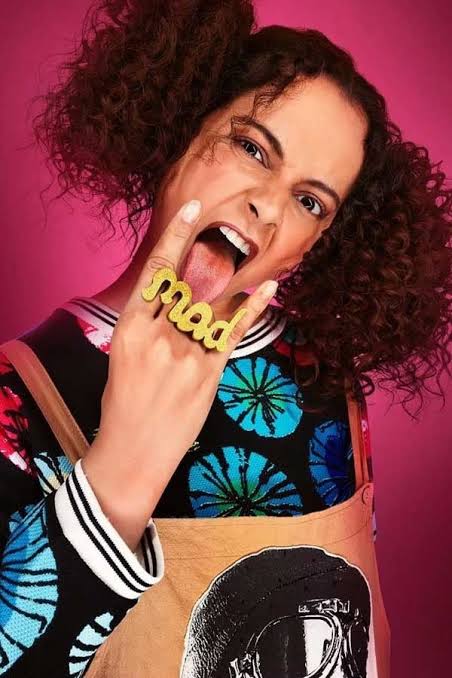 🌹So why should we listen to Kangana Ranaut?
🌹She is a real nutter, wading into areas she knows nothing about, assumes whatever’s happened to her generally happens to each and everyone, and that everyone who disagrees with her is against her?
🌹And like Parveen Babi she thinks there’s a DEEP STATE MAFIA operating within the Film Industry that’s out to get her!
🌹That’s insane, right?
🌹But suppose, just for a minute suppose…she’s telling the truth?
🌹What then?
🌹Boggles the mind!
🌹She maybe completely non compos, living in the mirror of her hallucinatory world, smoking up a storm of conspiracy theories egged on by Screaming Anchors Of Screeching TV…but suppose she is not nuts?
🌹What then?
🌹If she is telling the truth then Bollywood is the last bastion of The Evil Empire and if we look closely enough we shall find a heavy breathing Darth Vader lurking in the shadows!
🌹It’s a dark tale told by an inspired idiot articulating all the fears of all small town girls and boys about the depths of perversity in Bollywood!
🌹Kangana Ranaut has given a shape and sound to all the boogeymen your mother frightened you with as a child when you would refuse to go to sleep because you wanted to play some more!
🌹And these boogeymen come in the shape of Salman Khan, Shahrukh Khan, Aamir Khan, Hrithik Roshan, Mahesh Bhatt, Karan Johar, Aaditya Chopra…
🌹There are others too by God…Sonam Kapoor, Alia Bhatt, Pooja Bhatt, Soni Razdan, Deepika Padukone, Kareena Kapoor, Saif Ali Khan, Ranbir Kapoor, Ranveer Singh and now…Jaya Bachchan too!
🌹All are in this Army of Kangana Ranaut’s nightmares..taking the shape of demons, ghosts and ghouls…all but all our to get her and by extension out to get everyone else who did not make it in Bollywood!
🌹Remember “where nice guys get washed away in the snow and the rain…”
🌹Oh hell! This lot does not even listen to Glen Campbell anymore! So whom am I talking to?
🌹What’s her grouse?
🌹And the grouse(s) get multiplied each day
🌹They never appreciated me
🌹I gave such great hits and they didn’t even acknowledge me (I was the only sober soul on the sets of Manikarnika since 99% of Bollywood consists of drug addicts! Yes?)
🌹All my films were women oriented and did not need a hero to become super hits and they kept running me down
🌹It’s my turn now!
🌹And it’s the turn of every boy and girl who landed in Bombay (Mumbai) by train, bus and shank’s mare who was kept out by that horrendous lot who would just not bankroll “my success”
🌹”I would be a movie star if I could only get out of this place…” (I bet they haven’t heard Billy Joel crooning Piano Man either with a cigarette hanging from the side of his mouth)
🌹There it is then
🌹The tale of Kangana Ranaut’s Rakshasas!
🌹All of Ravana’s progeny seem to have congregated in Bollywood with the sole purpose of not allowing Ms Ranaut to succeed!
🌹And whether she succeeds in Bollywood again or not Screeching TV will ensure she implodes in an explosion of nuclear proportions taking quite a few with her
Screeching TV will of course move on to something else..