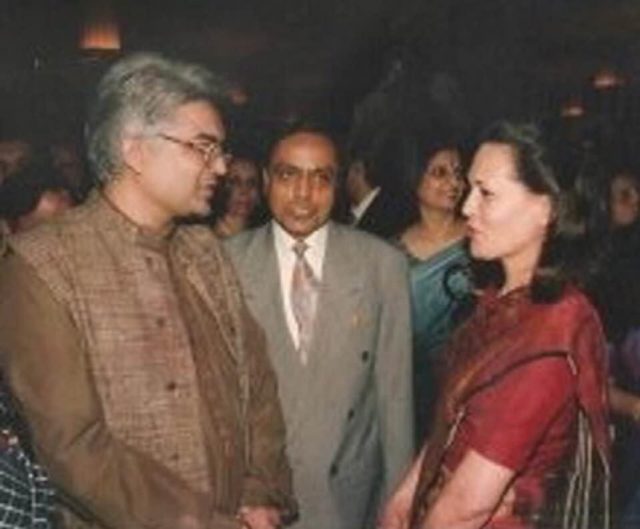 ♦️Write off Mrs Sonia Gandhi at your own peril
♦️1995-96…The Taj Mahal Hotel, Mumbai
♦️With my dear friend and elder brother the late #MurliDeora and of course Mrs #SoniaGandhi just before she took the plunge into active politics!
♦️Mrs. #Gandhi was kind enough to talk to me “on record” about how unhappy she was at the way the case against the killers of her late husband #RajivGandhi was proceeding
♦️I remember when it appeared the next day as the headline in THE DAILY (I was Editor) there was shock all over as to why Mrs Gandhi chose a Mumbai morning tabloid to go on record for the first time ever!
♦️I thought she was brilliant, beautiful, patriotic and with a courage that’s incomparable
♦️I still think she is brilliant, beautiful, patriotic and with a courage that’s incomparable
♦️And she is MORE INDIAN than most people pretending to be INDIAN!
♦️And you write off Sonia Gandhi at your own peril
♦️Long time ago I told a veteran journalist friend, now an esteemed Rajya Sabha MP, Sonia Gandhi learnt everything sitting at Mrs Indira Gandhi’s knee
♦️More than Rajiv Gandhi it is Sonia Gandhi who imbibed the absolute political brilliance of Mrs #IndiraGandhi
♦️And here is a woman, a white woman (memsaheb), not Angrez but Sicilian, having lived the greater part of her life in India still being taunted for her Italian birth
♦️She loses her brother-in-law in an air accident, gets partly blamed for the very public spat between Mrs Indira Gandhi and her widowed daughter-in-law #MenakaGandhi, loses her mother-in-law to a horrendous assassination, carries her bleeding mother-in-law cradling her head in her lap to AIIMS where she is declared brought dead and finally loses her husband to another assassination
♦️In the most tragic of all circumstances #RajivGandhi’s body cannot be retrieved as a whole and is recognised only by his Gucci running shoes
♦️How many more sacrifices do we expect from her before we acknowledge her grit, determination, courage and will to protect her children and serve her Indian motherland?
♦️How much more blood and tears should Sonia Gandhi have to shed before we appreciate how she rescued the Congress Party from the shambles she found it in to lead it to two consecutive victories in the Lok Sabha in 2004 and 2009?
♦️#SoniaGandhi is not just INDIAN she is more patriotic than many other Indians I know!
♦️And she will be back!
♦️(Just an aside but I began to colour my hair only after having been ordered to do so by Hon’ble #Saharasri in 2002 after I joined Sahara as Head of Sahara Samay Mumbai;he said it would be better for television and he was right)

SAVE THE GANGA WITH RKB