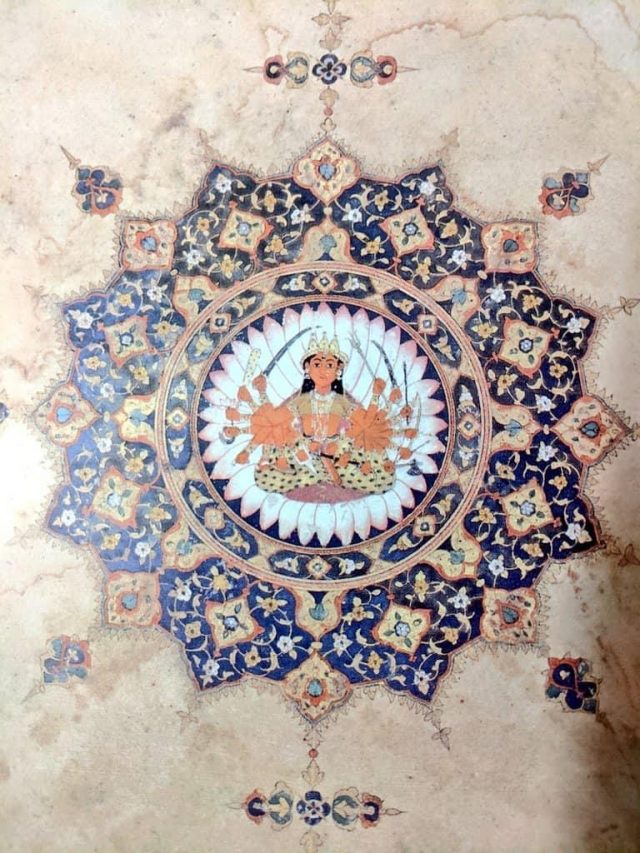 🌺From a #Sharda manuscript (Ancient Kashmiri) in Zurich, Germany. Identified simply as “Goddess radiating Energy”.
🌺She sits insides a Persian shamsa (sun) medallion.
🌺This is in fact the 18 Armed, Red Deity Of Hari Parbat named #SharikaDevi
🌺”Hari Parbhat” also known as “Sharika peeth” located at Srinagar (Kashmir) is one of the most holiest and sacred places not only of the Kashmir Valley but for all of India
🌺The story goes that at this Place, Goddess Sharika killed the demon “Jalodbhava”.
🌺The Goddess in the form of “Haer”(Myna) at the behest of her devotees dropped a Pebble from above on Jalodbhava.
🌺The pebble became larger and larger as it neared the ground
🌺When it Hit the Demon, the pebble had grown to the size of a Hill.The Demon was crushed under the Hill. The Hill that dropped on the Demon came to be known as “Hari Parbat”
🌺The Mother Goddess resides here by the name of “Sharika” or “Tripursundari”.
🌺The eighteen-armed Goddess is considered as the presiding deity of the Srinagar city. She resides here in the form of swayambhu “Sri-Chakra”, also known as “Maha yantra”.
🌺This mystic Chakra is self-engraved on the Holy Shila( a vertical rock smeared in sindoor).Since the Divine Mother resides in the form of a “Chakra”, hence, she is also locally known as “Chakeshwari” and the place/temple as “Chakrieshwar”

If Ram Had Killed Ravan Today, What Would The Libtards Have Said? By RKB