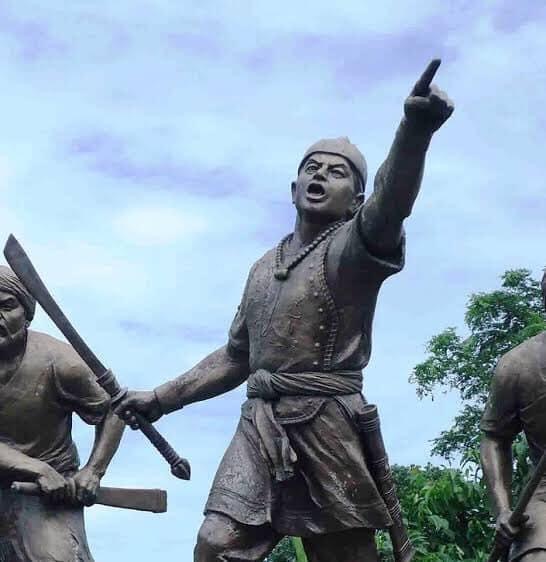 How The Ahoms Destroyed Aurangzeb’s Magnificent Eastern Army at Saraighat
🌹LACHIT BORPHUKAN’s BIRTH ANNIVERSARY; DO YOU EVEN KNOW WHO HE WAS? 🌹
♦️The man who destroyed Emperor #Aurangzeb’s magnificent Eastern Army on the Brahmaputra at Saraighat in 1671 is a name unknown outside Assam; #LachitBorphukan ‘s combination of guerilla and marine tactics decimated a Mughal Army 3 times the size of the Ahom Army
♦️And we have never been taught about him and The Battle Of #Saraighat
♦️Assam was invaded several times by the armies of the Delhi Sultanate in the 16th century with no success. The only invader, who managed to conquer some parts of Assam was the Mughal Governor of Bengal #MirJumla who had occupied large parts of the Ahom kingdom including Guwahati and the capital, Garhgaon. Yet, within five years, the Ahoms took back control of most of the lost territories.
♦️In August 1667, the Ahom general Lachit Borphukan had recaptured Guwahati. This outraged Mughal emperor Aurangzeb and he sent the Mughal commander #RamSingh of #Amber (Jaipur) with a large force in what would be the last Mughal attempt to conquer Assam.
♦️In 1670, the Mughals under Ram Singh’s army comprising of 21 Rajput chiefs, 30,000 infantry and 18,000 Turkish cavalry, marched towards Guwahati through the Brahmaputra river.
♦️The final battle was fought in early 1671, when the Mughals made a desperate attempt to break through the fortifications. Lachit who was ill at that time is said to have heroically gotten out of his sick bed, and rowed his boat straight at the enemy. This the chroniclers say, galvanized the Ahom army to such a frenzy that the Mughal forces were annihilated
♦️The battle, which would become known as the battle of Saraighat, was fought on the #Brahmaputra. Ahom engineers built an impenetrable fortification on water placing their boats in a row, one after the other across the breadth of the river.
♦️The whole stretch of Bramhaputra flowing through Guwahati between Kamakhya, Itakhuli and Aswakranta became littered with boats and dead bodies.
♦️The Mughal flotilla was completely smashed and the Mughal admiral #MunawwarKhan shot dead.
♦️It was a complete and decisive victory for the Ahoms.
♦️This battle of Saraighat came to be immortalised in Assamese literature and even today, you will find a small village called ‘Sarai’ on the banks of the Brahmaputra where the battle was fought.
♦️And after the victory at #Saraighat, the Ahom kings ruled Assam for over a 150 years more, that is till the annexation of the kingdom by the British in 1826.
(Ram Singh returned to Delhi in disgrace; the 18,000 Turkish cavalry was destroyed to the last horse; only 3000 of the infantry survived; of the 21 Rajput Commanders in the Mughal Army only 5 survived to tell the tale! The Mughals never attempted to conquer Assam again)