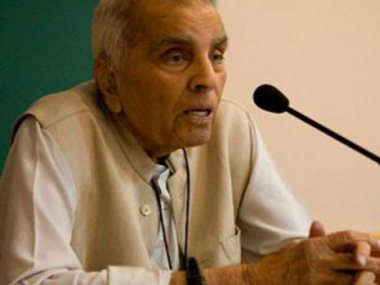 BHARAT RATNA FOR SACHAR
By RKB

Justice Rajinder Sachar deserves The Bharat Ratna!
If there’s anyone in India who has worked for national unity wherein the poorest of the poor, the weakest of the weak and the most downtrodden have been made to feel they are shareholders in this enterprise called India it is Sachar!
Generations to come will remember that the most cementing factor in India’s Unity was The Sachar Committee Report; in whichever form it is implemented!
When an Arya Samaji Hindu judge can actually stand up and tell the truth about the horrendous poverty that Muslims labour under it says something for the secular fabric of India!
And Sachar strengthened it like no one else!
That’s why Sachar deserves The Bharat Ratna!
I have always maintained Justice Sachar was a visionary…”how can a nation of 130 crore progress if 20 crore Muslims remain at the lowest rung of the economic ladder”…that’s what I could learn from The Sachar Committee Report…
Of course all my friends from the BJP/RSS/VHP (with whom I have a natural affinity) declared I was a traitor and I had sold out “Hindu” interests!
And I remember while heading another channel when we carried our campaign for acceptance and implementation of The Sachar Committee Report there were calls allegedly from Dubai/Karachi. The callers said “how dare you say Muslims are on a lower rung economically in some places than even Dalits?”
When it was pointed out that both The Sachar Committee and Ranganath Mishra Commission Report State this, there was a stone cold silence on the other end!
Funny part was even among educated and well to do Muslims there was resentment against Sachar…for stating the truth; that the Indian Muslim leadership had let down Indian Muslims! Not only let them down but had actually forgotten about them!m, to be remembered only when their votes were required every election!
This made Sachar a hated figure not only for the Hindu Right Wing but also for the Muslim elite!
And that’s why if anyone deserves the Bharat Ratna it is Justice Rajinder Sachar!
Sachar, above all, had courage and commitment to the truth!
Funny..people don’t realise poverty is the greatest curse; and resentment of poverty takes many forms!
What Sachar envisioned was a Nation that cared about all..especially the poorest of the poor who needed help the most!
Just for that alone this man will be remembered. ALWAYS!
And just for that Sachar deserves The Bharat Ratna!
The sad fact is the Justice Ranganath Mishra Commission which was appointed to submit a detailed study with recommendations based on The Sachar Committee has already been laid in The House.
The UPA did not have the courage to implement it
BJP has always opposed it
So how will this nation of 130 crore people progress if Muslims remain below the poverty line?
How will this Great Nation with this HUGE and DYNAMIC economy really become a Super Power with 20 crore people struggling and fighting to be part of the Indian mainstream?
How will this country of 130 crore people take its rightful place among the most powerful, democratic and free Republics of the world when 20 crore Indians are still being referred to as Pakistanis by morons of the Hindu Right Wing (who should be charged with sedition for saying so)?
These 20 crore will be part of the 130 crore ARMY OF INDIANS when the Sachar Committee Report starts to be implemented!
That’s why Sachar deserves The Bharat Ratna!
I know BJP had opposed the Sachar Committee Report and the recommendations of The Ranganath Mishra Commission!
But there is a man who can turn this around!
Personally only Prime Minister Narendra Modi has the wisdom and the gumption to implement it!
I hope he does!
Bharat Ratna for Sachar would be the first step!

From Ghalib To Saqi, Drink That’s Divine by RKB

Being Mahesh Bhatt “No Good Deed Ever Goes Unpunished” by RKB