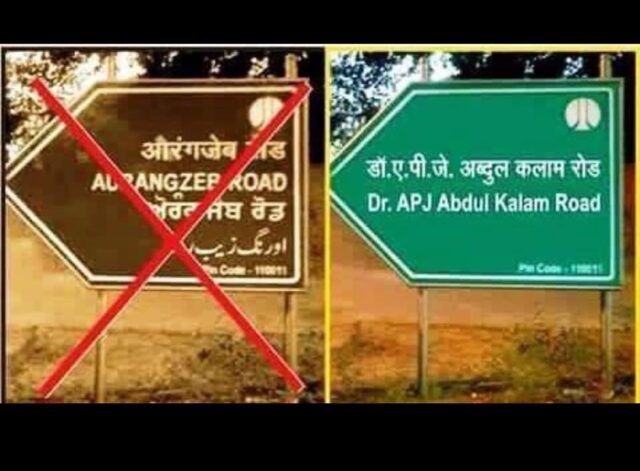 🌹I wrote this some years back when the name change took place a few years ago, and I recall how on my daughter’s first day in Jamnabai Narsee School here in Juhu Mumbai way back in 1999 , the first friend she made that rainy day was a girl called Manali who told me very proudly that her nanaji lived on No 1 Aurangzeb Road in Delhi, and that is where she spent all her holidays!! Those were the days….in the last year of the last century
🌹Changing of road n chowk names is a very political-flavour-of-the-period exercise! I remember the brouhaha over the name change of The Prince of Wales Museum here in Mumbai to The Chhatrapati Shivaji Maharaj Vastusanghralaya was undertaken during my tenure as trustee there….the board of trustees was headed by the late Jamshed Bhabha ( Homi Bhabha ‘s younger brother, n late Dorab Tata’s nephew, n who had “promised” to leave me all his Agas…like he had to a host of others!!!) n other “perpetual” board members who opposed it tooth-n-nail so much so that Bala Nandgaonkar then of the Shiv Sena had to carry out a strident morcha outside the Museum before the name change was undertaken!!
🌹But that is the name it is known by today, the contribution of the said Prince after whom it was named was zilch-zoot!!! And it comes under the Central Govt.
🌹The name change of Aurangzeb Road to Prez Abdul Kalam Road is strange because rightfully a road where this great soul lived should have been named after him….and may be instead of Aurangzeb Road it could have been called the Dara Shikoh Road ( Dara being his elder brother whom Aurangzeb had had slaughtered for not being a fanatic n mainly because he was in his way to being King!).
🌹Poor Dara Shikoh a restless spirit it is alleged lies buried in the Humayun’s Tomb complex! And this name would have been right up BJP’s street because:”Dara Shikoh is widely renowned as an enlightened paragon of the harmonious coexistence of heterodox traditions on the Indian subcontinent.
🌹He was an erudite champion of mystical religious speculation and a poetic diviner of syncretic cultural interaction among people of all faiths. This made him a heretic in the eyes of his orthodox brother and a suspect eccentric in the view of many of the worldly power brokers swarming around the Mughal throne.
🌹Dara was a follower of the Persian “perennialist” mystic Sarmad Kashani, as well as Lahore’s famous Qadiri Sufi saint Hazrat Mian Mir, whom he was introduced to by Mullah Shah Badakhshi (Mian Mir’s spiritual disciple and successor).
🌹Mian Mir was so widely respected among all communities that he was invited to lay the foundation stone of the Golden Temple in Amritsar by the Sikhs.
🌹Dara subsequently developed a friendship with the seventh Sikh Guru, Guru Har Rai. Dara devoted much effort towards finding a common mystical language between Islam and Hinduism.
🌹Towards this goal he completed the translation of 50 Upanishads from its original Sanskrit into Persian in 1657 so it could be read by Muslim scholars. His translation is often called Sirr-e-Akbar (The Greatest Mystery), where he states boldly, in the Introduction, his speculative hypothesis that the work referred to in the Qur’an as the “Kitab al-maknun” or the hidden book, is none other than the Upanishads.
🌹His most famous work, Majma-ul-Bahrain (“The Confluence of the Two Seas”), was also devoted to a revelation of the mystical and pluralistic affinities between Sufic and Vedantic speculation.
🌹The library established by Dara Shikoh still exists on the grounds of Guru Gobind Singh Indraprastha University, Kashmiri Gate, Delhi, and is now run as a museum by Archaeological Survey of India after being renovated.”
🌹And whilst on this topic, why have we got Archbishop Makarios Marg in Delhi?? Or one named after Kamalataturk?? Mind-boggling this road naming business!!

Hanuman, King Of Ghosts and A 1000 Shri Rams by RKB