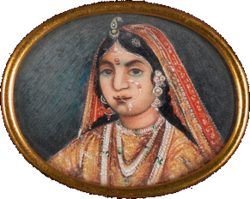 🌹On April 2nd, 1858 , 162 years ago, with Damodar Rao on her back #Lakshmibai, Rani Of Jhansi jumped on her horse Badal from the fort; they survived but the horse died.
🌹Lakshmibai (#ManikarnikaTambe) escaped from the British in the night with her son, surrounded by her select guards including #KhudaBakhshBasharatAli (commandant), #GulamGausKhan, #DostKhan, #HanifullahBaksh, #RaisKhan and her 50 Pathan warriors plus Lala Bhau Bakshi, Sunder-Mundar, Deewan Raghunath Singh and Deewan Jawahar Singh.
🌹She decamped to Kalpi where she joined additional rebel forces, including Tatya Tope
🌹She died a Warrior’s Death on June 2nd, 1858 wounded but still fighting!
🌹All her Pathan Bodyguards (all Muslims by the way) also died fighting with her and at her side to the last man!