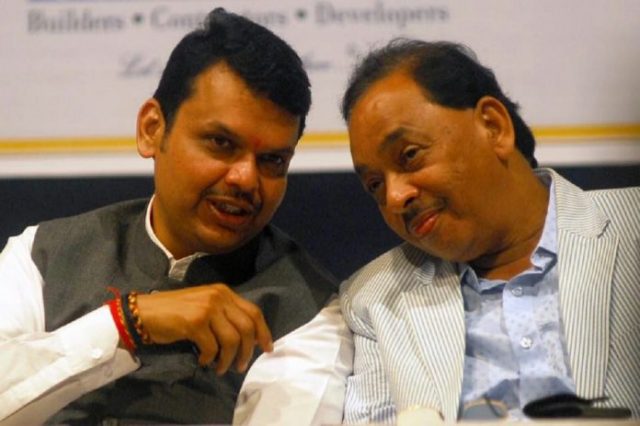 I have known Narayan Rane a long, long time!
Almost 25 years!
You can fault Rane on so many things; he is impulsive, gets angry quickly, a very thin skin!
But if there is one thing about Rane that no one can point a finger at is his ability to get things done, his courage in the face of all adversity, and his genuine love for Balasaheb Thackeray!
I know people are going to point to the horrendous slanging match between the two when Rane’ left the Shiv Sena…however I know for a fact that Rane still had this HUGE PORTRAIT of Balasaheb in his Living Room even after he left the Sena.
It was taken down only after Balasaheb was egged on to say something horribly personal about Rane’
Even now, you ask Rane about Balasaheb and the first thing he says “Balasaheb MADE ordinary Maharashtrians into LEADERS”
Today Rane, the once Emperor of Konkan, is at a crossroads
He needs to win ONE election!
That’s it!
The day Narayan Rane wins one more time from anywhere in his native Konkan he will be back!
Even now this is possibly the smartest thing BJP could have done; taken Rane’s new party into the NDA fold.
Soon, very soon Rane will be a minister again in the Maharashtra cabinet
This will mean the BJP will have a lethal weapon not just against the Congress but against the Shiv Sena too…and here lies the greatest thing BJP and Rane have done!
Unlike the Congress the BJP’s vote does not dither!
Agreed, the BJP’s presence in Konkan is not what it is elsewhere, but even here Narayan Rane will be assured that BJP/RSS cadres will not betray him.
What was done to him in the Congress was nothing short of a crucifixion! Persuaded to stand for election from Mumbai only to have every Congress leader work against him!
Point is how much will the BJP be strengthened by Rane’s presence?
I would say immensely!
Now Maharashtra Chief Minister Devendra Fadnavis need not even react to every barb from the Shiv Sena’s Samna; Rane’s inherent aggression will do the job!
So has Rane finally found his natural political home?
In the present circumstances I would say yes..considering the fact that this Shiv Sena is completely different from the Sena of Balasaheb, Anand Dighe, Chaggan Bhujbal, Narayan Rane…
Will BJP be able to win a majority on its own in Maharashtra come the elections in a couple of years?
A few more people like Narayan Rane and we could see 15 years of BJP!