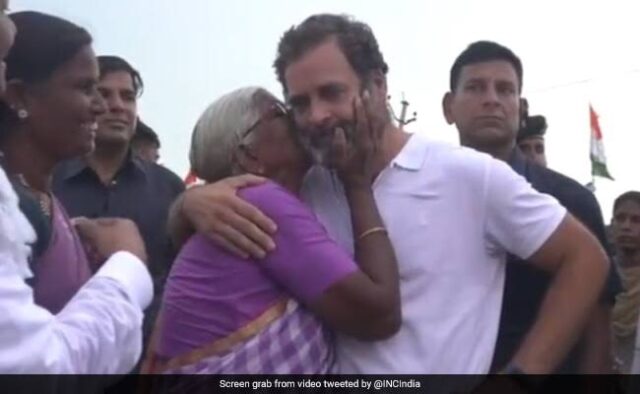 BJP Bullies Gandhis
So what was the whole shebang about the internal elections within the Congress
Simply this; the Bharatiya Janata Party succeeded in bullying the Gandhi’s into doing this with their constant and continuous chant of “Congress is a family run enterprise”
Modi-Shah went eyeball to eyeball with the Gandhi’s and the Gandhi’s blinked
Congress without a Gandhi at the helm is like a headless chicken in a storm
This is the worst that could have happened to the oldest political party in India (some angrez de puttar journalists call it the Grand Old Party after the Republican Party in the United States…but these clowns haven’t had an original thought in their head ever)

Rahul Is The Best Bet
Rahul Gandhi’s Bharat Jodo Yatra seems to be drawing more crowds than even the greatest optimist in the Congress could have believed
And like all the Yatras and Yatris before him there is every possibility that like Chandrashekhar, YSR, KCR, Digvijaya Singh this Yatra too will result in a quantum jump in Rahul Gandhi’s and the Congress’ political goodwill
So commonsense demanded that the Congress insist on Rahul Gandhi for President with a coronation during the course of the Yatra
But if there is one thing that the Congress has been devoid of in recent times it is commonsense

Kharge Has 6 months
So now what happens?
Mallikarjun Kharge saheb tries to revive the Congress just like he did when he was leader of the Congress in the Lok Sabha ? (He wasn’t Leader Of The Opposition because the Congress HAD only 44 MPs then)
If Kharge saheb’s past record is anything to go by a policy of drift will rule…till the Congress is decimated further?

Return Of Rahul Gandhi
And then as per usual everyone will turn to the only saviours available; the Gandhis…Rahul or Priyanka, take your pick
Yes there is also a Varun Gandhi; but he comes into this story later
I give the Congress rank and file six months before they insist on the Return Of Rahul Gandhi as Party President
If Kharge saheb leads the Congress into 2024 General Election, the Congress Party…my father and grandfather and grandmother’s party may not achieve even double figures in the Lok Sabha!
If I can see this, can’t the rest of the lot in the Congress?
What are they waiting for?
A bigger disaster than the one that has engulfed them already?

A Tale Of Torture, Persecution and Exploitation; the NINE Migrations (EXODUS) of Kashmiri Pandits...