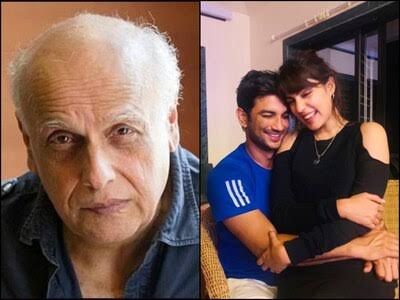 So Sushant Singh Rajput was bullied?
Looks like it!
If Rhea Chakraborty and her family could bully
the boy, the bully-off with the rest of the film industry would have been traumatic (Even though we don’t use bully off in hockey anymore; it’s just a mundane push start)
Rhea Chakraborty allegedly seduces him, entraps him, gets him to do her bidding, robs him and kills him; alright gets him so depressed he kills himself…that’s the story on News TV and NO CONTRIBUTION at all from Ekta Kapoor’s creative team!
And Sushant Singh Rajput is how old? 16? 18?
He is a 34 year old man for God’s sake
(By the time I was 34 I had been sent to jail twice, had been charged with sedition 6 times, defamation over 20 times)
And here is this femme fatale who’s led him like a lamb to the slaughter?
(Eid al adha just went by so this gets even more macabre)
“By the pricking of my thumbs/ something evil this way comes..”
Who is she?
The third of the three witches brewing “ eye of newt and toe of frog..”?
“Husband I have got hemlock and dill, now you must do my every will?”
This gets even more murkier than a Ramsay Brothers horror movie with cardboard ghosts and thermocol monsters!
Only this time they are all on TV!
TV news now displays the worst of the tabloid yellow streak that senior journalists used to turn up their noses at (to my eternal shame and disappointment I have always had a very sensitive but very small nose with flailing nostrils of a chimpanzee except the chimpanzee looks handsome and I look like the back of a clock; so even I don’t know when it’s up or down)
So what happened?
First there were the Bully Boys
Mahesh Bhatt, Karan Johar, Aditya Chopra who ganged up with Salman Khan, Shahrukh Khan et al to drive this young man to suicide as if the survival of Bollywood depended on it
That’s like dropping a 5 tonne nuclear bomb to kill a mosquito (but malaria is kind of menacing; so one never knows)
Then along came Polly…alright Rhea
And even as the money trail got hotter just so the screeching banshees of Mainstream media would not look like Silly Billies “we got the PICTURES!!!l”
Just look, look, look…” there’s Mommy kissing Santa Claus” or something to that effect
And what are the damning pictures?
Mahesh Bhatt resting his head in the crook of Rhea Chakraborty’s arm and another one on her shoulder and a third where she is hugging him!
That NAILS it, by GOD!
Don’t you know he said HELLO to her?
He did it!
Did what you pissants?
Gave more newcomers a foothold on the Big Screen than all of Bollywood put together?
Went to sleep on a girl’s shoulder?
So when that does not work, we dream up something else..
The real cracker!
There was a PARTY!
Do you know Ajit THE LOIN (not LION) had a party and, and, and …THEY WERE THERE!
Then the icing on the cake with the “cherry on top” ( where is he by the way the turbaned one? Why are we missing his wisdom on this one?)…Aaditya Thackeray and Rhea Chakraborty in a car, on a date!
THAT’s IT!
We have got them now!
Only the girl in the car with Thackeray Junior turns out to be Disha Pattani and they had gone out LAST YEAR!
So now what do we do?
Ask the screaming Pink Panthers?
THE PARTY!
Oh yes the party…
We have to attack Aaditya Thackeray to attack Uddhav Thackeray to show why the Mumbai Police is not doing what WE WANT THEM TO!
And yes, if the Govt falls in the process…
That will be real rock ‘ n roll
In an incredible display of triumphalism never seen before on television one hysterical anchor (actually they are all, all hyster-I-chal) raises his arms like Asaram Bapu, in a speech full of fire and brimstone promising retribution unless …
And we know what happened to Asaram Bapu!
Now this brings us to the Uniformed Boys From Bihar
These are chaps, like their Mumbai Police counterparts, who are just doing their jobs!
If only the Bihar elections had been in 2021 December instead of 2020 everyone would have worked hard to get to the bottom of what really happened to Sushant Singh Rajput
Meanwhile we await the next instalment from the Hills of Manali for the Oracle to announce her next B-grade branding for the Baddies Of Bollywood
Thankfully we seem to be finished with Karan Johar and Aditya Chopra who would be wondering why did we “evah” get into film making!
Or is there more to come there too?
Karan Johar, Aditya Chopra, Mahesh Bhatt how dare you succeed when we did not?
And while we are at it let’s have a go at the Mumbai Police…
But of that tomorrow…