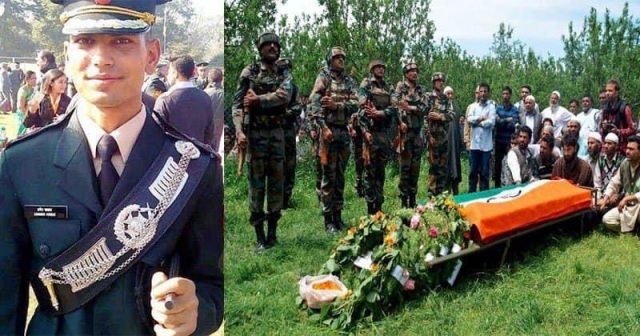 🇮🇳ALWAYS REMEMBER; NEVER FORGET! Lt UMMER FAYAZ (CHINAR CORPS) TORTURED AND MURDERED BY HIZBUL MUJAHEDDIN MURDERERS
🇮🇳Lieutenant #UmmerFayaz (8 June 1994 – 9/10 May 2017) an Indian Army officer who was abducted and killed in May 2017 by Lashkar-e-Taiba and Hizbul Mujahideen militants in Jammu and Kashmir, India.
🇮🇳Lt Fayaz He had been commissioned as a Lieutenant in the Indian Army from the Indian Military Academy, Dehradun on December 10, 2016 and was serving in the 2nd battalion, Rajputana Rifles.
🇮🇳Ummer Fayaz was born in Kulgam, Jammu & Kashmir, India in 1994, and studied at Jawahar Navodaya Vidyalaya,Anantnag and the National Defence Academy.
🇮🇳He faced several difficulties while in training as people in his home were not supportive of his decision to join the Indian Army. However, Fayaz was determined to join, as he used to say “I will change my Kashmir, I will make it heaven on earth again”.
🇮🇳At the time of Fayaz’s abduction he was on leave from duty and was also unarmed. He had come to his uncle’s house in Shopian district, Jammu and Kashmir to attend a marriage ceremony in his family. On the night of 9 May 2017 he was abducted from his uncle’s house.
🇮🇳Hizbul Mujaheddin terrorists tortured and shot him twice; his dead body was found the next morning
🇮🇳All the murderers who were responsible for his death were killed in security operations on 31 March and 1 April 2018 by Rashtriya Rifles units.
Jammu & Kashmir Police stated that terrorist Abbas Bhat, who was wanted in connection with Fayaz’s abduction and murder, was among the militants killed in Operation Batagund on 25 November 2018.
🇮🇳In 2017, Lt Ummer Fayaz was the 847th name to be engraved on the War Memorial at the Indian Military Academy.
🇮🇳In May of the same year, the Army Goodwill School, an army school in Jammu and Kashmir, was renamed Shaheed Lt. Ummer Fayaz Goodwill School by the Indian Army to honour Fayaz.