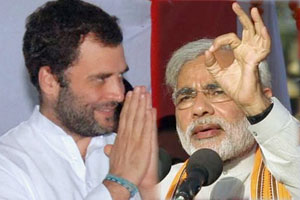 Losing Gujarat May Not Be So Bad
By RKB

What happens now that all EXIT POLLS have said BJP is winning Gujarat?
As in what happens to Rahul Gandhi’s Congress?
If the Congress gets past the figure of 70 (seventy) in a 182 member House that will be A VICTORY FOR RAHUL GANDHI
For the BJP to win anything less than 125 would be a defeat!
However the Congress will have to look at what went wrong…again!
With Hardik Patel, Alpesh Thakur, Jignesh Mewani representing Patidars, OBCs and SCs with them and still NOTHING at the hustings will show the Congress organisation is the worst light possible!
This was the Congress’ best opportunity to dent the BJP’s reputation for being impregnable in Gujarat!
That EXIT POLLS show Congress has lost again can only mean the Grand Old Party’s Organization on the ground is non-existent!
Now that’s a task for President of the Congress Rahul Gandhi.
Mr Gandhi could hold genuine elections to all local and state bodies in the Congress; and let whosoever wins run them the way they used to be run during Jawaharlal Nehru’s time!
Build up State Leaders…let them acquire the status of Satraps, let them RULE in your name and rebuild Congress from the BOTTOM UP!
It will be a long, very painful process and Mr Gandhi will have to proceed step by step…
He needs to have his Generals with genuine armies beside him…and now he can choose!
A defeat in Gujarat may not be such a bad thing after all; he will have a clean slate to start with, should he so choose!
Will he choose?
Somehow I doubt it!