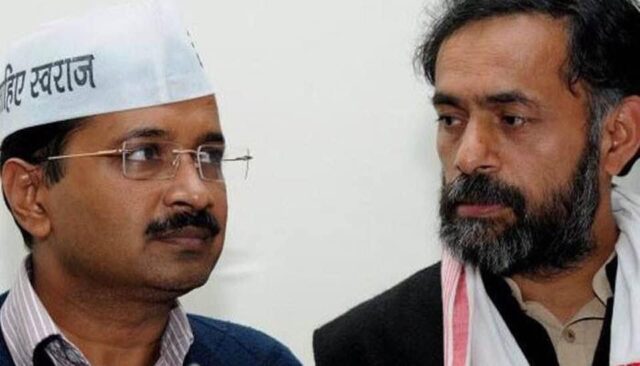 ♦️GET BACK TOGETHER OR FACE EXTINCTION
♦️The barely controllable self serving satisfaction on #YogendraYadav’s face has to be seen to be believed each time #AAP loses an election anywhere!
♦️After that unprecedented 67 out of 70 in 2015 in Delhi it’s clear #Kejriwal needed Yadav, Bhushan, Vishwas, Gandhi
♦️Right now he only has #ManishSisodia
♦️And that may account for one election debacle after another since 2015
♦️The 62 out of 70 in Delhi’s State Assembly elections I fear may have done more to damage #AAP and it’s inner democracy than anything else
♦️The second victory by landslide (and 3rd overall) seem to have convinced the AAP leadership that they are not only infallible but also invincible
♦️I have been a journalist for 40 years; I have seen political parties suffer from hubris after each victory and become insufferably irrational after every defeat
♦️Look at the Congress
♦️If Rahul Gandhi has performed badly electorally Kejriwal’s performance has been disastrous!
♦️At least Rahul Gandhi has a few state Govts where Congress is in power so far and where they are in alliance
♦️Kejriwal’s forays into Punjab and Haryana have yielded nothing in electoral terms (Bhagwant Mann Bhai Saheb notwithstanding)
♦️Fact : Kejriwal needs help
♦️Fact : Kejriwal is a smart man
♦️Fact : Kejriwal is also a conceited man
♦️Fact : If #AK was willing to have an alliance with the Congress then what’s the problem with requesting the Old Guard to return?
♦️Fact : Every suggestion like this is met with a string of abuse from lunatics who have damaged Kejriwal while posing as his BHAKTAS!
♦️Fact : AAP was a party of VOLUNTEERS NOT BHAKTAS/LOYALISTS
Will the REAL AAP return and save #AAP from
Extinction?
That depends on whom #AK listens to…his shrill lobotomised lunatic loyalists or the voice of reason!
♦️Will Kejriwal invite Yogendra Yadav, Prashant Bhushan, Mayank Gandhi, Kumar Vishwas and the rest back to AAP?
♦️Can you just imagine what a difference the presence of Yogendra Yadav and Prashant Bhushan would have made in articulating AAP’s position with regard to its efforts in battling COVID?
♦️Do Kejriwal and Manish Sisodia have the generosity of spirit, large heartedness and the vision to take AAP back to the HUGE FORCE it was promising to become for political change in the country, or will they remain satisfied as frogs in the small well of the Delhi Assembly that has no authority and no powers?

Murdering Mangroves In Chembur by RKB