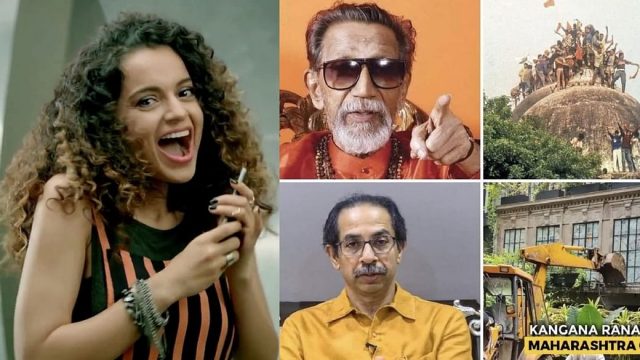 🥀It is tragic (and at times catastrophic) when anyone’s house, part of a house or part of anything you have built is demolished!
🥀Coming right down to it, there is nothing that can be more awful than seeing the structure you have built with such loving care and fond hopes brought down
🥀Sure it may have been illegal
🥀Sure permission may not have been taken
🥀Sure it was built on a premise that such an action would never be taken by the Municipal Corporation
🥀But that’s legalese
🥀Fact is a house, office, part of an office brought down is a trauma one lives with forever
🥀So it’s not surprising that Kangana Ranaut is taking the way she is
🥀She worked for this
🥀She slogged for it
🥀She earned it all…all alone
🥀In Bollywood no less!
🥀Does that make it legal?
🥀No it doesn’t!
🥀So is Kangana Ranaut right in using the kind of language she has against the Chief Minister of Maharashtra Uddhav Thackeray?
🥀Not at all
🥀Uddhav Thackeray is the CM of a HUGE STATE, of the most prosperous state in India; he is not the Commissioner of the BrihanMumbai Municipal Corporation!
🥀And to attack him, challenge him and address him as if she is addressing one of her minions is a disgrace!
🥀And when she invokes Balasaheb Thackeray its a joke!
🥀Does she know what would have happened to her and her cohorts if Balasaheb had been around?
🥀I mean COME ON!!!
🥀Balasaheb Thackeray was a friend of mine
🥀If there was one politician you could count on at anytime in and around Maharashtra it was Balasaheb!
🥀I find it nothing short of hilarious that people who have known nothing of the Shiv Sena are talking about how this Sena is not Balasaheb Thackeray’s Shiv Sena!
🥀There can be no Shiv Sena without Balasaheb Prabhodhankar Thackeray!
🥀And he would have been over the Moon with happiness at the fact that his son #UddhavThackeray and grandson #AadityaThackeray managed to achieve the impossible; outmanoeuvred the BJP to become Chief Minister of Maharashtra!
🥀Do remember Balasaheb was the Sena and the Shiv Sena was his life
🥀For piddly little dunderheads who have never faced terrorist bullets, even a lathi charge and the full fury of a State machinery charging at you with everything at its disposal to pretend to be brave in the safe confines of their studios is like the Clown in King Edward III claiming to have won the Battle of Crecy all on his own!
🥀It’s a foolishness devoutly to be wished away!
🥀Yes, Kangana Ranaut has every right to feel wronged
🥀But perhaps a bit of restraint and temperance in her speech would help matters
🥀And my dear and most respected friend Sanjay Raut, MP would do well to treat a girl with the courtesy she deserves even if she is being provocative, rude and well downright silly!
🥀A nice “we understand what you are feeling but you have to understand we have to govern the state of Maharashtra not just the state of your mind”
🥀Meanwhile #SushantSinghRajput has been all but forgotten!