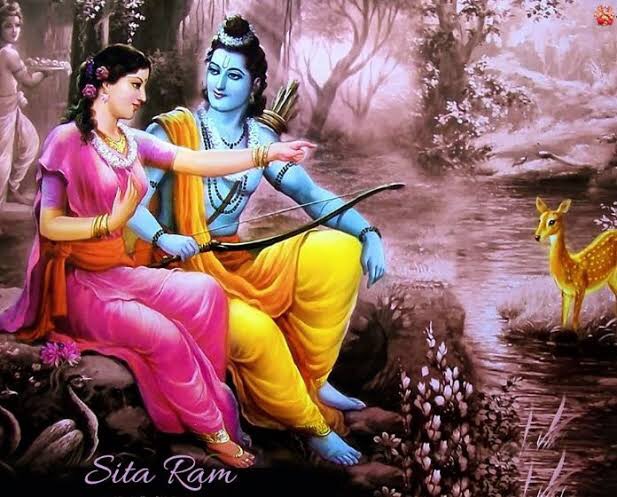 ♦️JAI SIYA RAM ♦️
♦️Shri Ram Was A Non-Vegetarian?
♦️This is research conducted by Shri #Kandukuri, a Sanatan Dharma and Ramayana researcher…not my work! (I wish it was mine)….and many other researchers who have studied and worked on all 300 Ramayanas over centuries!
♦️And do remember this was a time when there was no guilt attached to meat eating the kind which is sought to be imposed by a particular way of thinking today
♦️Wherein Hindus are forced to think in a manner that has always been alien to their ethos!
♦️The new Hindutva that has almost turned Sri Rama, the greatest Warrior King on Earth ever, into a leaf eating emotional ascetic!
♦️So here goes….
“I would like make it clear that we should read and understand Sri Rama , depending upon his stay.
♦️His staying in Ayodhya, as the eldest son of King Dasaratha.
♦️During his exile period in Dandaka Forest and in Kishkinda
♦️We have to remember that Sri Rama belongs to Kshatriya clan. And, meat eating and alcohol consumption are not prohibited for people belonging to Kshatriya clan. So he might have consumed both meat and alcohol till he went for 14 years exile period into Dandaka forest. Nothing wrong in it.
♦️Now coming to his stay during his exile period in Dandaka Forest and in Kishkinda.
♦️Having given his word to Kaikeyi that he will live in forests, Sri Rama adopted the life of forest dweller with purity reflected in thought, speech and conduct (Trikarana Shuddhi).
♦️Apart from adopting to the outer appearance of Forest dweller’s life, he also adopted the food habits of a Forest dweller, i.e., living on roots and fruits.
♦️While consoling his mother #Kausalya, after disclosing his intention to live in the Forest for 14 years, Sri Rama says :

“I shall live in a solitary forest like a sage for fourteen years, leaving off meat and living with roots, fruits and honey”.

“Oh, Venerable sage! Commanded by our father, we are entering a lonely forest to practise the Dharma (way of forest dweller’s life), living on roots and fruits.”

However, I came across the following heatedly debated topic in web forums of all sorts :

♦️Did Sri Rama eat meat during his exile in Forest?

The supporters of the subject in question quote the following Slokas to substantiate their argument.
♦️After meeting Sage Bharadwaja at Prayaga, Sri Rama alongwith Sita and Lakshmana proceeds to Chitrakuta. After crossing Yamuna, they stay that night under a tree. It was narrated there that the 2 brothers killed some animals and ate them.

“Thereafter having travelled only a couple of miles the two brothers Rama and Lakshmana killed many consecrated deer and ate in the river-forest of Yamuna.”

♦️After the 2 brothers Sri Rama and Lakshmana leave Ma Sita to go after the golden deer Ravana enters their hermitage and asks Sita about her. After narrating their story, Sita says that Sri Rama would be coming back soon with food.

“Be comfortable for a moment, here it is possible for you to make a sojourn, and soon my husband will be coming on taking plentiful forest produce, and on killing stags, mongooses, wild boars he fetches meat, aplenty.”

♦️Here, the argument was since Sita was herself saying that Sri Rama would be fetching plenty of meat, Sri Rama was taking meat.

♦️After meeting Sita, Sri Hanuma while explaining the bodily signs, behaviour and valour of Sri Rama to her, says that Sri Rama was depressed and that he was not sleeping and eating properly.

“Rama is not eating meat, nor indulging even in spirituous liquor. Everyday, in the evening,he is eating the food existing in the forest (roots and fruits), well arranged for him.”

♦️While quoting the last sloka, the argument put forth was that since the abduction of Sita, Sri Rama was not eating meat, nor indulging even in spirituous liquor, he must be taking both meat and consuming liquor before abduction of Sita.

♦️It would be difficult to separate the Real Ramayana from the Prakshiptas, namely depicting Sri Rama as the incarnation of Lord Vishnu, Sita Parityaaga (disowning of Sita in Yuddha Kanda) episode, etc, inserted at a later date. It does not mean to conclude that all the above 3 Slokas are Prakshiptas.

♦️The 1st (first) Sloka stating that the two brothers Rama and Lakshmana killed many consecrated deer and ate in the river-forest of Yamuna (Ayodhya Kanda 55 Sarga 33 Sloka), must be a Prakshipta, as in the earlier Sarga Sri Rama himself stated that they were entering a lonely forest to practise the Dharma (way of forest dweller’s life), living on roots and fruits (Ayodhya Kanda 54 Sarga 16 Sloka).

♦️After hearing the news of the death of his father, King Dasaratha, Sri Rama faints away. After recollecting himself, he tells Lakshmana to prepare food for offering to the departed soul of King Dasaratha.

Rama placed the pulp of the Ingudi tree mixed with the pulp of plums on a mat of Kusa grass and overcome with sadness, weeping, spoke the following words:

“O, Great King! Be pleased to partake of this, which we eat for. That which man eats, is also consumed by his gods.”

♦️Here Sri Rama was saying “That which man eats, is also consumed by his gods.” As he offered pulp of Ingudi Tree to the departed soul of King Dasaratha, it means that Sri Rama was subsisting on Roots and fruits available in the Forest but not on meat.

♦️The second Sloka, wherein Sita says, ….”soon my husband will be coming on taking plentiful forest produce, and on killing stags, mongooses, wild boars he fetches meat, aplenty.”(Aranya Kanda 47 Sarga 22 Sloka), can be understood in a right manner, if we go deep in to the context of that episode.

♦️As per the arguments put forth by Vali, while on his death bed, to Sri Rama, the Braahmanas in the time of Ramayana used to eat meat of certain types of animals.

“Raghava, five kinds of five-nailed animals, viz., a kind of wild rodent, a kind of wild-boar, a kind of lizard, a hare and fifthly the turtle are edible for Brahmans and Kshatriya-s.”

♦️However, somewhere along the line, the Braahmanas, except in some parts of India, stopped taking meat and became vegetarians.

♦️Ravana enters the hermitage of Sri Rama and Sita in the get up of a Brahmin (द्विजाति वेषेण ). It is the duty of the householder to respect and give food to a guest. If the guest is a brahmin, some more care will be taken.

♦️As Ravana was in the disguise of a Brahmin, Sita thought of giving food appropriate to a Brahmin. Sri Rama might not be taking meat, but he can fetch meat to honour his guest. So there is nothing wrong in what Sita said, if it is understood in right perspective.

♦️The third Sloka, wherein Sri Hanuma says “Rama is not eating meat, nor indulging even in spirituous liquor.” should be understood with reference to the state of mind of Sita.

♦️Sita was meditating on Sri Rama incessantly and weeping after her abduction by Ravana. With no known person around, facing continuous torture by Raakshasa Women was not a small act. She faced all these tortures bravely, but occasionally breaking down and thinking negatively of Sri Rama and Lakshmana.

♦️After Ravana left Asoka Vatika threatening Sita either to surrender within 2 months or to face death, Sita while weeping and remembering Sri Rama says as follows:

“Having fulfilled your father’s command as per the order of his words and observed your vow, you return from the forest fearlessly and having accomplished your purpose, I think you will enjoy carnally with large-eyed women.”

♦️Sri Hanuma, who heard her wailing earlier from the top of Sisupa Tree, understood her state of mind. She needs consolation that Sri Rama was infact equally anxious to get her back. In this context Sri Hanuma said that Sri Rama was not eating, sleeping properly and added that “Rama is not eating meat, nor indulging even in spirituous liquor.”

♦️This was to console Sita that Sri Rama was not neglecting her.

♦️So Shri Ram, Maryada Purushottam, was a Kshatriya and has to be understood as such!