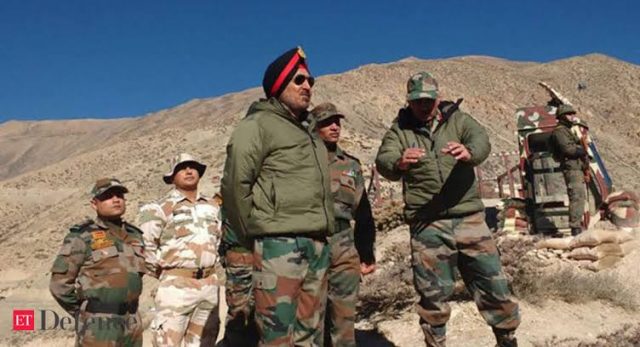 ♦️When will we ever learn?
♦️Give and take with China means India gives and China takes!
♦️For the Chinese the LAC or Line of Actual Control has always meant the Line you can Actually Control
♦️By putting our faith in diplomacy and a negotiated solution we are again playing into China’s hands
♦️The Chinese are masters at protracted negotiations that give an impression of peace being worked out but in fact negotiations are just a camouflage to allow the Chinese Army to consolidate its land grab!
♦️The euphoria over India having gained control of 7 peaks in and around Chushul and Pangong Tso Lake simply hides the fact that these peaks were always marked as being on the Indian side of the LAC but were unmanned!
♦️In effect we have just managed to gain control of our own areas overlooking Chinese positions to prevent them from grabbing more Indian land
♦️The fact remains we have restrained our armed forces from precipitate action against the Chinese PLA
♦️Conversations with boys serving in Eastern Ladakh reveal that the Indian Armed Forces are ready to teach the PLA a lesson they will not forget
♦️We shall discuss the military aspects of the situation in Ladakh, in Uttarakhand, North Bhutan and Arunachal Pradesh later
♦️So why are we holding back?
♦️That’s because we never learn from our mistakes
♦️We say we have but we repeat the same mistakes again and again and again
♦️In 1954 we signed the Panch Sheel agreement with China and gave away all flexibility over Tibet
♦️It was stupid
♦️And then the great Accords that laid down no use of fire arms thereby emasculating our own Armed Forces from exercising all options!
♦️Will things be different now?
♦️I hope they are
♦️A couple of things give me hope
♦️India in 2020 is different from the non-Social Media driven India Of 1962 and later
Prime Minister Narendra Modi’s own image (ghar mein ghuss Kar maarta hai) will not allow him to accept a solution that shows him in a weak light
♦️Maybe the inbuilt aggressive nationalism in the Modi led BJP is India’s best bet to stand upto the Chinese and force them to retreat
♦️Till now the Indian side has always come off worse in every negotiated settlement not only with the Chinese but also with the Pakistanis
♦️The 1948 ceasefire in Kashmir and the subsequent petition to the United Nations
♦️The 1954 Panch Sheel Agreement with China’s Zhou En Lai
♦️The 1960 Indus River Water Treaty
♦️The 1966 Tashkent Agreement where we gave away Haji Pir Pass after the heroic battle to capture it! If Haji Pir had been with us there would have been no Kargil War in 1999
♦️The 1972 Shimla Agreement where we gave away on the negotiating table all that the armed forces had won on the battlefield
♦️So what’s so different now?
♦️Just one thing ; Modi!
♦️Rather Modi’s Image!
♦️Even the slightest admission of weakness or retreat will shatter the image of strong nationalistic fervour that has built the Modi persona!
♦️Uri and Balakot will be nothing if news gets out that the Indian Army was forced to retreat in the face of the Chinese Threat!
♦️The whole aura of invincibility that has been so carefully nurtured around the Indian Prime Minister will turn on the BJP’s own core competence and shatter it!
♦️Thank God for that!
♦️This is our best bet in tackling a bully that understands only the language of force and unapologetic assertion of nationalism
♦️Hopefully the Boys on the Border will be given complete operational freedom to tackle each situation on its own merits; given that our troops are seasoned high altitude fighters who will force the Chinese PLA to turn tail as soon as actual hostilities break out!
♦️I have said this before and am saying so again
♦️Negotiations and diplomacy will get India nothing!
♦️The Chinese will have to be pushed out by force
♦️And the sooner the Mandarins Of South Block realise that the better it will be for all of us!
♦️So what do I think will happen?
♦️The Chinese will be pushed out after getting a bloody nose by the Indian Armed Forces in spite of the best efforts of our diplomats still living in the 60s and 70s!

Kangana On Prime Time, Rhea In Jail; #SSR Case? What’s That? By RKB