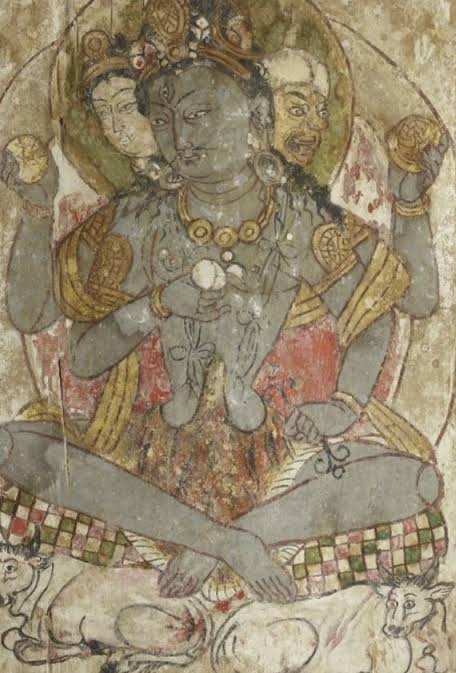 🌹IF THE CHINESE CAN CLAIM AKSAI CHIN AND THE GALWAN VALLEY INDIA CAN CLAIM THE WHOLE OF XINJIANG, ANCIENT KHOTAN, WHERE SANSKRIT AND ITS DERIVATIVES WERE THE SPOKEN LANGUAGES AND THE RAMAYANA, THE MAIN RELIGIOUS TEXT🌹
🌹Unlike the Chinese claims that rest on claims that are so extraordinarily fake as to be not not even worth commenting on, if culture is a criterion for claims on land then Xinjiang is part of the Great “Indian” Civilisation
🌹And since it’s open season on laying claim to each other’s territory, whyever not? The same Xinjiang where the Chinese have BANNED ISLAM, imprisoned more than a million Uyghur Muslims in concentration camps and made possession of The Holy Koran a crime!
🌹Most people do not know that until about a thousand years ago, the Tarim Basin (northwest of Tibet, which is the part of Xinjiang below the Tian Shin Mountains) was Indic in culture and it was a thriving part of the Sanskritic world; its people spoke the Gāndhārī language which many see as descended from Vedic Sanskrit, and the closely related Khotanese Saka. Perhaps the region to compare it most is Kashmir, to whose north it lay
🌹There was also much interaction between the two regions with many scholars traveling from Kashmir to Khotan, and silk culture is believed to have passed from Khotan to Kashmir and then into rest of India.
🌹Gāndhārī inscriptions have been found as far east as Luoyang and Anyang in Henan province in Eastern China which attests to the vastness of the influence of Sanskrit. Europeans in recent centuries called the whole region Serindia, indicating the meeting place of China and India.
🌹Khotanese kings were Mahāyāna Buddhist but we know this sect incorporates Vedic and Tantric systems, with all the devas such as Indra, Śiva, Viṣṇu and Sarasvatī, and just places the Buddha at the head of the system (as in Vidyākara’s Treasury).
🌹There was also Krishna worship in Khotan and we find the Rāma story in Khotanese language, of which there is also a Tibetan version.
🌹The Buddhists put a characteristic spin on the Rāma story, which has had immense power on the imagination of the people all over Asia. In their variant, Rāvaṇa, after losing the war is spared his life, and becomes a worthy Buddhist to accord with the Laṅkāvatārasūtra, set in Laṅkā, in which the Buddha instructs Rāvaṇa. (Likewise, in order not to lose followers of Rāma, Jain texts show him as a faithful Jain.)
🌹The Khotanese Rāmāyaṇa is not the standard Rāma story. In it Daśaratha, who is called Sahasrabāhu (“thousand-armed”), fights with Paraśurāma and gets killed, and his sons Rāma and Lakṣmaṇa are saved by a queen. When they grow older they slay Paraśurāma in revenge and become masters of all Jambudvīpa.
🌹Has the Foreign Office /Ministry of External Affairs considered the above?
🌹And I am serious; since the Chinese are serious about FAKERY and COMICAL CLAIMS it’s time to hit them back with Civilisational Claims of our own!