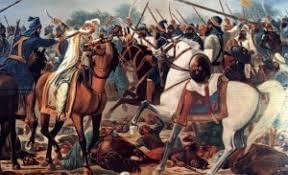 🔴THE REAL STORY OF PANIPAT🔴
♦️WHEN SIKHS LED BY SARDAR JASSA SINGH AHLUWALIA RESCUED 22,000 MARATHA WOMEN CAPTURED BY ABDALI AFTER PANIPAT; AND TODAY YOU ARE CALLING PROTESTING SIKH FARMERS, DESCENDANTS OF THE SAME SIKH MISLS “KHALISTANIS”????
♦️For me the real story of the Third Battle Of Panipat begins after the battle was over!
♦️The Afghan soldiers ran amok on the streets and fields of Panipat, beheading, killing, mutilating, raping…
♦️More than 22,000 Maratha women survived the initial assault and were being taken back to Afghanistan to be sold in the slave markets! These were the highest ranking and most beautiful of the women in the Maratha camp; and would have got Abdali a tidy profit!
♦️In April 1761, Abdali was returning triumphant having destroyed the Maratha army at the third battle of Panipat. His booty included 22,000 Hindu women (some were also Muslim) being taken to Afghanistan to be sold into slavery.
♦️So far, the Sikhs had watched this theater from a distance by not taking any sides in this battle. The Sikhs were at Sarbat Khalsa, their bi-annual meeting at Amritsar when the relatives of the women pleaded for help. They heard of the slaughter of innocent, rapes of women, and capture of more than twenty thousand Maratha women by the afghans. They heard of the fate of their country’s daughters being driven away as Abdali’s bounty.
♦️Their ire was aroused. All the Khalsa Misls got together and passed a “resolution” that Abdali is taking Indian women as slaves to his country after plundering the city of Panipat and they will free all the slaves.
♦️Organizing themselves in small bands, the Sikhs decided to attack the rear of Abdali’s army carrying the Indian women as captives.
♦️ #JassaSinghAhluwalia led the volunteer force and caught up with the Afghans at the River Sutlej at Goindwal.
♦️The Afghans were caught by surprise at the swiftness and ferocity of the Sikh attack. Before they could gather themselves to counter the attack, the Sikhs had rescued the Maratha women and carried away much of Abdali’s booty.
♦️The Sikhs rescued many Maratha women who were being carried off to Afghanistan as slaves. Many widows were not accepted back by their families (they said they had been violated) and instead married Sikh soldiers.
♦️This action of Sikh Misls required great audacity, swift and faultless execution and a complete indifference to danger. Jassa Singh became a household name in north India for his heroics and was appointed as the “Jathedar” of all Misls at the next Sarbat Khalsa.
♦️Abdali reached the safety of Kabul with a bruised ego and a broken nose. However he came back to Punjab to avenge this humiliation and massacred thousands of Sikhs and destroyed the Harmandir Sahib, Amritsar filling up the Sacred Sarovar with dead bodies.
♦️But the Sikhs rose again and liberated the Harmandir Saheb, driving Abdali back to Afghanistan
♦️70 years later a one-eyed Sikh Maharaja would avenge the 3rd Battle Of Panipat by destroying the Afghan Army and conquering Kabul. His name was Maharaja #RanjitSingh!
♦️Now THAT’s a MOVIE I would love to see!
(That’s a picture of the Sikh night attack on Abdali’s camp and Jassa Singh Ahluwalia)