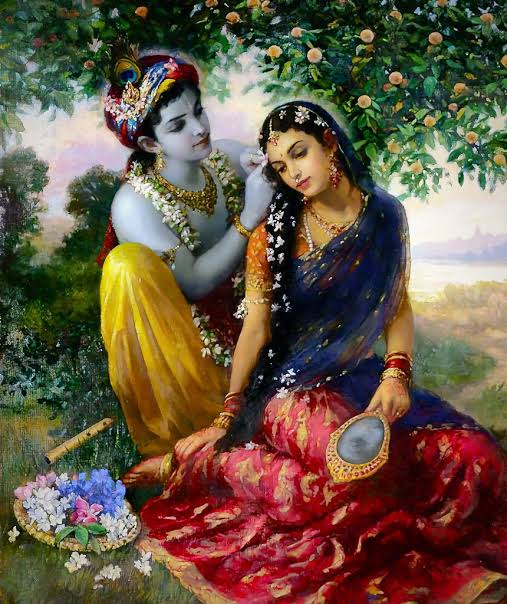 🌹Happy Janmashtami🌹
🌹Let’s see how HAPPY it really is..
🌹Krishna’s born in jail to a mother imprisoned by her own brother
🌹Yet Krishna is never shown as anything but happy
🌹As soon as he is born he has to be spirited away in the dead of night in pouring rain, a flooded Yamuna river on a Moonless-Starless night to be handed over to Nanda and Yashoda at Brindaban
🌹And yet Krishna is happy
🌹As soon as he learns to crawl a she-demon Pootna tries to kill him; he kills her instead
🌹As soon as he learns to play the Nagaraja King tries to bite him to end the Krishnavatara right there and then; of course Krishna ends up dancing on his hood and enforces his eviction
🌹Now he is really happy
🌹He falls in love (the only time he really, really falls in love) with Radha whom he can never marry
🌹And both Radha and Krishna are not just happy they are in ecstasy knowing full well that their time together is limited
🌹He plays the flute so beautifully that all creatures come to listen
🌹And he is always portrayed with that little smile on his lips, always happy
🌹And when he is called to Mathura he has to abandon his flute leaving it behind for Radha ji, never to play it again
🌹And yet Krishna does not weep
🌹Instead the flute is replaced with a discus
🌹Even with a discus in hand that smile never leaves him
🌹In Mathura he kills the two most renowned wrestlers and finally kills his uncle Kamsa
🌹He frees his mother Devaki and father Vasudeva and naturally he smiles
🌹And he has hardly been crowned King when Jarasandha’a Army surrounds Mathura so he has to move again…with everyone in Mathura
🌹And yet Krishna smiles
🌹He sets up a new home in Dwarka only to be embroiled in the warring feuds of his cousins the Kauravas and Pandavas resulting in the most destructive war the world has ever seen till then
The Mahabharata War…in which finally just about everyone dies
🌹Yet Krishna does not weep
🌹And Dwarka the enchanting, beautiful, magical, magnificent city is reclaimed by the sea leaving Krishna distraught and alone
🌹And still he does not shed tears
🌹Finally he dies alone pierced by a hunter’s arrow that goes through his foot to come out of his head
🌹All alone, again!
🌹And yet Krishna is always smiling, always happy!
🌹That’s why it is HAPPY JANMASTHAMI…
🌹Like Krishna, no matter how hard the fight, how long the battle, how impossible the odds…that quiet smile on Krishna’s face is what makes the world run, and run well…