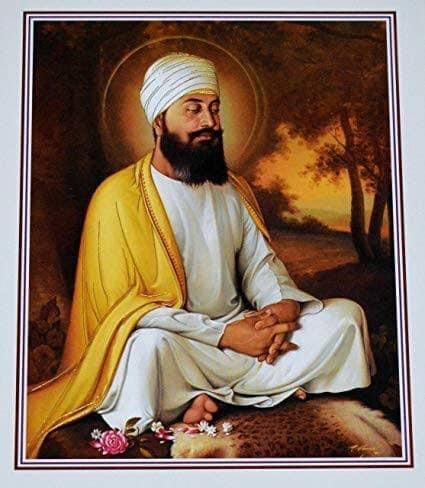 🌹Nov 24, 1675 (some historians say Nov 11) #HindKiChadar Guru #TeghBahadur Saheb was beheaded by Emperor #Aurangzeb at Chandni Chowk, Delhi where the #SisGanj Gurudwara stands now; a disciple stole Guru Saheb’s body where it had been left for the ravens, vultures and vermin (in Royal tradition), brought it home and set fire to his house to complete the last rites!
🌹Gurudwara Sri #RakabGanj stands where Guru Saheb’s last rites were performed!
🌹Before being beheaded Guru Saheb was kept in an iron cage and forced to watch as his three disciples Bhai #MatiDas was cut into pieces with a saw, Bhai #SatiDas was boiled alive and Bhai #DyalDas was burnt alive!
🌹This is what Kalgidhar Badshah Guru Gobind Singhji Maharaj writes about his father in the Bachittar Natak..

(Casting off his bodily vesture on the head of Suzerain Of Delhi; Teg Bahadur departed to the Realm of God.
None who came into the world performed such glorious deeds as him.
On his departure, there was dismay in the world.
This world cried, “Alas, Alas”. The Heavens rang with greetings of victory.)

🌹Guru Tegh Bahadur Ji was approached by Hindu Pandits from the Kashmir region, seeking the Guru’s intercession against forced conversions of Hindus to Islam by the Mughal rulers of India.
🌹For supporting the Kashmiri Pandits (those Kashmiri Pandits again; they couldn’t fight for themselves even then) by resisting these forced conversions, and for himself refusing to convert to Islam, Guru Teg Bahadur Ji was publicly executed via beheading at the imperial capital of Delhi on the orders of Emperor Aurangzeb.
🌹Today, Gurdwara Sis Ganj Sahib and Gurdwara Rakab Ganj Sahib stand at the sites of beheading and cremation of Guru Ji’s body. Along with Guru Teg Bahadur Ji, three of his disciples as mentioned before, Bhai Mati Das, Bhai Sati Das and Bhai Dyal Das were also publicly executed in the most horrible manner!