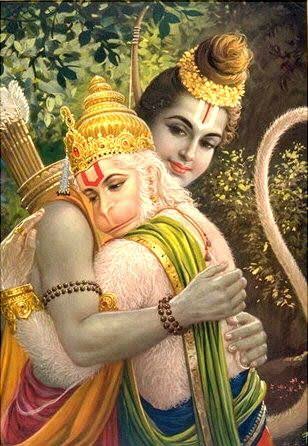 🌹One day when Sri Ram was sitting on his throne, his ring fell off. When it touched the earth, it made a hole in the ground and disappeared into it. It was gone.
🌹Hanuman as usual was at Ram’s feet.
Rama said to Hanuman, ‘Look, my ring is lost. Find it for me.’
🌹Hanuman can enter any hole, no matter how tiny. He has the power to become the smallest of the small and larger than the largest thing. So he took on a tiny form and went down the hole. He went and went and went and suddenly fell into the spiritworld!
🌹There were women ghosts who saw him first “Look, a tiny monkey! It’s fallen from above!’
🌹Then they caught him and placed him on a platter (thali).
🌹The King of Spirits (Bhutas ), who lives in the netherworld, likes to eat animals.
🌹So Hanuman was sent to him as part of his dinner on a plate.
🌹Hanuman sat on the platter, wondering what to do.
🌹When he was finally taken to the King of Spirits, he kept repeating the name of Rama. ‘Rama Rama Rama”
🌹Then the King of Spirits asked, ‘Who are you?’ ‘Hanuman.’ ‘Hanuman? Why have you come here?’ ‘Rama’s ring fell into a hole. I’ve come to fetch it.’
🌹The Spirit King looked around and asked one of his minions to fetch a platter.
🌹On it were thousands of rings. They were all Rama’s rings. The king brought the platter to Hanuman, set it down, and said, ‘Pick out your Rama’s ring and take it.’
🌹They were all exactly the same!
🌹I don’t know which one it is,’ said Hanuman
🌹The King of Spirits said, ‘There have been as many Ramas as there are rings on this platter. When you return to earth, you will not find Rama. This incarnation of Rama is now over. Whenever an incarnation of Rama is about to be over, his ring falls down. I collect them and keep them. Now you can go.’
🌹So Hanuman left and found Shri Ram has already entered the Sacred Saryu with all his people (but that’s a different story for another time)
🌹This story is told to suggest that for every Yuga and every such Rama there is a Ramayana.
🌹The number of Ramayanas and the range of their continuing influence in South and Southeast Asia over the past twenty-five hundred years or more is incredible!
🌹A list of languages in which the Rama story is found : Assamese, Balinese, Bangla, Cambodian, Chinese, Gujarati, Javanese, Kannada, Kashmiri, Khotanese, Laotian, Malaysian, Marathi, Oriya, Prakrit, Sanskrit, Santali, Sinhalese, Tamil, Telugu, Thai, Tibetan, Awadhi, Urdu, Persian; and innumerable European Western languages.
🌹Through the centuries, some of these languages have hosted more than one telling of the Rama story.
🌹Sanskrit alone contains some twenty-five or more tellings belonging to various narrative genres (epics, kavyas or ornate poetic compositions, puranas or old mythological stories, and so forth).
🌹If we add plays, dance-dramas, and other performances, in both the classical and folk traditions, the number of Ramayanas grows even larger.
🌹To these must be added sculpture and bas-reliefs, mask plays, puppet plays and shadows plays, in all the many South and Southeast Asian cultures.”
🌹 #CamilleBulcke (1950), a student of the Ramayana, counted three hundred tellings.
🌹It’s no wonder that even as long ago as the fourteenth century, Kumaravyasa, a Kannada poet, chose to write a Mahabharata, because he heard the cosmic serpent which upholds the earth groaning under the burden of Ramayana poets (tinikidanu phaniraya ramayanada kavigala bharadali)
🌹Hanuman of course is still around and wherever the Ramayana is recited, sung, played or performed with devotion there is always an old man sitting with his head covered somewhere in the audience…that’s Hanuman!
(And yes…just like all The Ramayanas…there are many other versions of Shri Ram’s ring and Hanuman’s predicament; this is just one of them. So what’s the point of this story? When there have been over a thousand Shri Rams, it’s a lesson for human beings to shed their inane arrogance in their puny existence and be like Hanuman; always loyal, always in “devotion” and always in “prayer” without asking for a reward)

The Captain & His Leela By Amita Nayar Bajaj