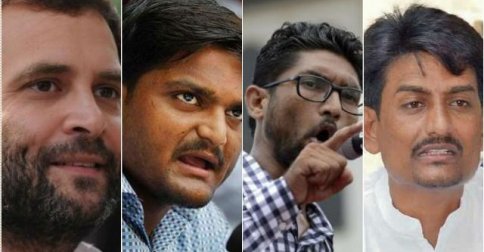 Has President of the AICC (All India Congress Committee) Rahul Gandhi arrived?
He’s been coming for 20 years; has he reached now?
I had said the other day that for the Congress anything above 70 would be a VICTORY!
They have 80!
EIGHTY!
Against the BJP’s 99!
The BJP has 99 where they were expecting 135!
Now that’s called a real rockstar beginning for a party that had been written off as too old, jaded, geriatric, diseased and soon to be deceased!
Rahul Gandhi, by aligning himself with THE THREE MUSKETEERS of Gujarat Hardik Patel, Alpesh Thakor and Jignesh Mevani has breathed new life into the carcass of this MOST BEAUTIFUL organisation we call the Congress Party!
Will he succeed in waking up the Old Girl to let us all know how lovely she still is?
This is what I wrote when the EXIT POLLS indicated a BJP landslide in Gujarat…
“If the Congress gets past the figure of 70 (seventy) in a 182 member House that will be A VICTORY FOR RAHUL GANDHI
For the BJP to win anything less than 125 would be a defeat!
However the Congress will have to look at what went wrong…again!
With Hardik Patel, Alpesh Thakur, Jignesh Mewani representing Patidars, OBCs and SCs with them and still NOTHING at the hustings will show the Congress organisation is the worst light possible!
This was the Congress’ best opportunity to dent the BJP’s reputation for being impregnable in Gujarat!
That EXIT POLLS show Congress has lost again can only mean the Grand Old Party’s Organization on the ground is non-existent!
Now that’s a task for President of the Congress Rahul Gandhi.
Mr Gandhi could hold genuine elections to all local and state bodies in the Congress; and let whosoever wins run them the way they used to be run during Jawaharlal Nehru’s time!
Build up State Leaders…let them acquire the status of Satraps, let them RULE in your name and rebuild Congress from the BOTTOM UP!
It will be a long, very painful process and Mr Gandhi will have to proceed step by step…
He needs to have his Generals with genuine armies beside him…and now he can choose!
A defeat in Gujarat may not be such a bad thing after all; he will have a clean slate to start with, should he so choose!
Will he choose?
Somehow I doubt it!”
I still stand by what I wrote….
Rahul Gandhi should rightfully be making plans to hit the BJP in the gizzard in Chattisgarh, Madhya Pradesh and Karnataka!
Is he doing it?
I don’t see signs of it just yet…
But after Gujarat I am hopeful…the Congress will search for and find the right allies!
Just like they found THE THREE MUSKETEERS in Gujarat there will have to be an equivalent in every state that goes to polls!

JAI SIYA RAM! Was Sri Ram A Meat Eater? And What’s Wrong With That by RKB

When Shiva Is Reborn by RKB

When Shiva Is Reborn by RKB