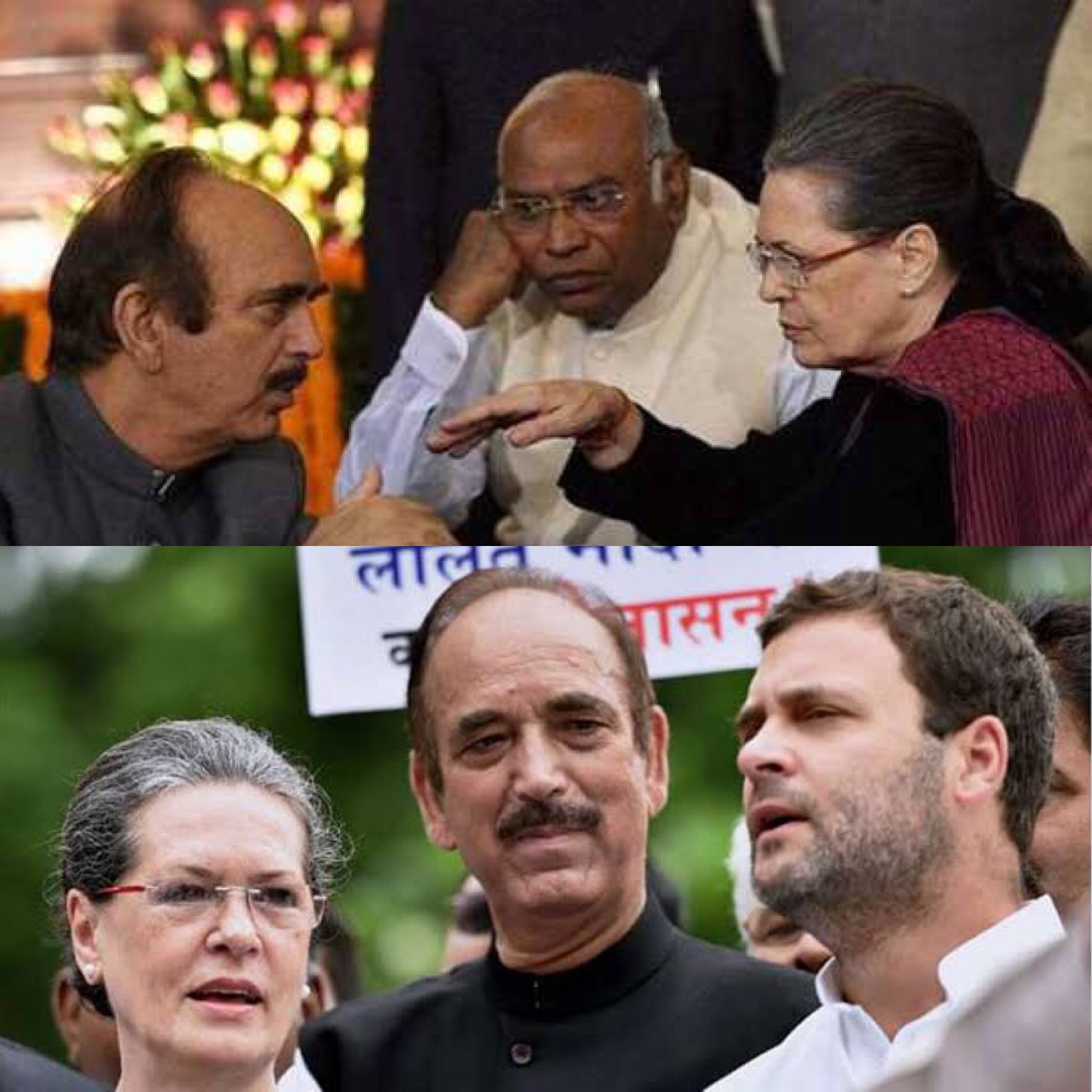 🌹So Ghulam Nabi Azad quits the Congress!
🌹Can you believe that? The man who got everything from the Congress; from being among the youngest members of the Congress Working Committee to being a minister in Prime Minister Indira Gandhi’s Government at the age of 33 to being Health Minister in Dr Manmohan Singh’s Govt to being made the Chief Minister of Jammu & Kashmir?
🌹And now he finds he can’t breathe in that same Congress party because the Congress Party under Sonia Gandhi and Rahul Gandhi has suffered defeat after defeat in elections?
🌹Like everyone else Azad saheb is probably also heading towards the Bharatiya Janata Party
🌹And why not? It’s politics!
🌹Will Congress as in #SoniaGandhi Ji #RahulGandhi Ji #PriyankaGandhi Ji PLEASE wake up now at least?
 🌹We NEED the #Congress to remain strong, vigorous and focused!
🌹Perhaps now the Congress could resurrect the #SevaDal, the #MahilaCongress, the #YouthCongress and the #NSUI plus all the trade unions and Co-operatives you were associated with?
🌹Maybe now’s the time to begin again when no one expects anything from you…
♦️Begin with the simple things; like Prabhat Pheris in the poorest areas, with Aman Committees in Muslim majority areas, with student counselling centres…with Rahul Gandhi himself going door to door in the most politically sensitive neighbourhoods
♦️Priyanka Gandhi Vadra could carry on doing what she’s already done in Uttar Pradesh…women empowerment, Girl Power, and stay right there in Lucknow till the 2024 Lok Sabha elections
♦️Resurrect your nukkad offices, your social work organisations, your booth structure that is the model on studying which the BJP learnt how to fight and win!
🌹There are still lakhs of freedom fighters everywhere just waiting for that call from a “Gandhi”
🌹It’s an Army waiting to be unleashed on behalf of the Congress
🌹And above all the Congress has to be smart and traditional!
 🌹While you keep trying to undermine the Modi Govt keep fllying on #Pegasus, don’t let it die
 ♦️Petrol at ₹109.40 per litre and Diesel at ₹97.45
 ♦️Vegetables and other consumables so high priced as to be almost out of reach of everyone
 ♦️Some dals (pulses) at ₹205 per kg
 ♦️Businesses shutdown, non-existent jobs, and no hope of a turnaround for Medium, Small and Micro Enterprises
 ♦️Hotels and restaurants downing shutters with no signs of re-opening
 🌹And opposing the #Modi Govt on getting rid of Art 370 is shooting yourself in both feet
 🌹Rightfully the Congress should have said:
 ”We are with OUR Govt but please do tell us what do you plan to do afterward?
 How many schools will you build? Schools with books, laboratories, playgrounds and teachers; not just buildings
 How many Health Centres/Dispensaries/Mohalla Clinics?
 How many PSUs will base their manufacturing units in the newly formed UTs of Jammu & Kashmir and Ladakh to generate one crore jobs?
 When will cinema halls/Multiplexes/malls reopen in Srinagar?
 When do you expect to restore the internet, media, newspapers in Kashmir?
 When will you release all those Kashmiri leaders under House Arrest?
 And most importantly When will you retake Pakistan Occupied Kashmir?
🌹Take a commitment from the Hon’ble Home Minister #AmitShah Ji on the floor of the House with a timeline
🌹And support the Govt on the Bill, and if you can’t, ABSTAIN don’t oppose
🌹Now THAT would have been something
🌹The people of India are totally with #Modiji on this one
🌹You are making the same stupid BLUNDER just like you did on the #UriSurgicalStrike and #Balakot!
🌹Continue in this manner and soon there may be no Congress left
🌹My father, grandfather…wherever they are…would be holding their heads in their hands and weeping at what you have done to this MAGNIFICENT party that defined India!
🌹Will you wake up now please?
🌹India needs a strong, responsible Opposition!
 🌹Pegasus and whatever else will only take you this far and no further
 🌹Meanwhile you can keep thinking that you are still the Great Congress that ruled India for 45 years
🌹You know Mr Gandhi you could be that same party again…just learn a little bit from AAP!
🌹And you have your winning strategy: the winning formula will follow!
 🌹Will the Congress leadership do it? Even now people are waiting for the Congress leadership to resurrect the party of the Freedom Movement!
♦️Soon there won’t be any left ♦️