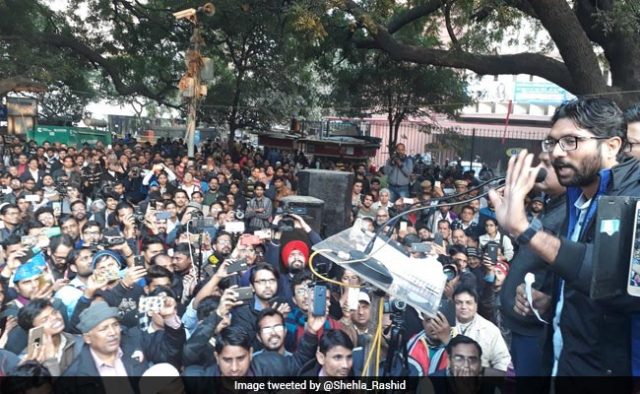 DALITS ARE NOT FOR BEHEADING
By RKB

So what does Bhima Koregaon show us?
Apart from the Brahminnical fury with which the Dalit celebration and agitation was greeted it also showed in all its stark savagery the horror of the Brahmin-Upper Caste dominated TV channels at the “impudence” of these fellows to challenge the status quo!
Incredible!
In this day and age, there is not a single Dalit who heads a single Mainstream Corporate News Channel in the country!
Not one!
Even the percentage of Dalits in the reporting/Desk/content teams is so abysmally low as it be non-existent!
Naturally when Dalits in their hundreds of thousands celebrating a 200 year old victory were stoned, abused, attacked the Upper Caste dominated media very conveniently had NOTHING to say!
When Dalits called for a strike (bandh) in retaliation leading to stray cases of arson and some of physical violence the entire media got into the act…
“Isn’t it time we moved on from what took place 200 years ago?”
“Wasn’t Bhima Koregaon a victory of the British East India Company against other Indians?”
“Celebrating a British victory is anti-national”
“Jignesh Mevani-Umar Khalid are part of the Bharat Tere Tukde Honge gang, therefore anti-national ”
This mind you is not just from the Ruling Party but from the media…
Move On, they say
Agitate against hunger, poverty, joblessness
And other such platitudes!
Lovely!
Remember December 6, 1992?
A 500 year old mosque ( well almost; it was built at Ayodhya by Mir Baqi, one of Babar’s Generals in 1528-29) was demolished by people associated with the BJP with some very senior BJP leaders in attendance!
So it’s alright for an Upper Caste Party to agitate for and succeed in demolishing a 500 year old mosque but it’s not OK for Dalits to celebrate one of the greatest victories of the Mahars 200 years ago?
The Mahar (read Dalit) identity is anchored in that stupendous victory over a far more powerful and humungous force (500 against 28,000), so why would they give it up just so that the Upper Caste dominated media can feel comfortable in their middle class morality?
What do they expect?
That like Shri Ram they will be allowed to behead Shambhuka today?
This is the Kali Yuga…all four Varnas have an equal share of the spiritual cake…”all may drink of Soma Juice”
On a more serious note…why is the RSS etc so disturbed at the rise of Jignesh Mevani and Chandrashekhar (of the Bhim Army) ?
This is because this young lot is neither intimidated nor bullied nor pressured by the old and tried tactics of media manipulation and outright lies!
But most importantly because this new lot of Dalit leaders makes common cause with Backward Castes among Muslims and even endorses “reservations for Marathas”
The RSS, to its credit, has been working hard to grab leadership of the Dalit movement by a subtle use of Hindutva and casteless dialectic! However it’s own middle class followers have let down the RSS leadership…
Jignesh Mevani was born in the caste ridden cauldron of Gujarat and the atrocity of Una ensured no “ghar wapsi ” for others like him.
Chandrahekhar’s story is even more intense…in caste torn Uttar Pradesh the Bhim Army was created to fight fire with fire..
And whereas Chandrashekhar has been under the radar, Mevani has achieved that rarest of the rare distinction of being labelled “anti-national” by BJP spokespeople and their dimwitted foghorns in the media!
The problem now for BJP is the new Dalit movement is not the Old RPI that could be shattered into its various constituents allowing a Ramdas Athavale to be inducted into the saffron pantheon
It’s not even the Dalit Panther movement where finally firebrands like Namdeo Dhasal were ruthlessly forced into irrelevance
This is something new
The BJP/RSS does not understand it but knows the political danger they represent
The Upper Caste media that knows NOTHING of the trials and tribulations Dalit youth live through on an hourly basis is afraid of this new movement and therefore labels it anti-national..
The point is with the new media the more you attack Jignesh Mevani, Umar Khalid and the rest the bigger they grow…in effect BJP’s foghorns in the media have inadvertently contributed the maximum to the strengthening of the New Dalits!
Just an aside but…no one questioned the basic principle of Rajput Pride being associated with a mythical Queen who may or may not have lived in 1303 ( 715 years ago) …they only questioned the methods of the Karni Sena etc…but question the premise of Mahar/Dalit pride in a victory over their tormentors 200 years ago!
Now if that’s an fair, objective and honest media then I am the Pope’s Uncle!