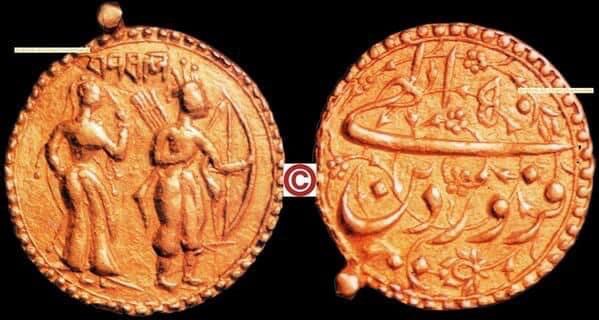 🇮🇳This is MY INDIA🇮🇳
🇮🇳Isn’t it YOURS?🇮🇳
🇮🇳When AKBAR THE GREAT ISSUED SIYA RAM COINS🇮🇳
♦️1584 CE is a landmark year in the reign of #EmperorAkbar, as Akbar founded a new religion called ‘Din-i-Ilahi’, amalgamating teachings of different faiths, along with a new Ilahi calendar, that started with the introduction of the new faith.
♦️To mark the event, #Akbar began issuing coins that came to be called the llahi coins.
♦️One unique set of IIahi coin was minted in the last year of his reign, and these were the Ram-Siya coins issued in the year 1604-05.
♦️The coins, with the images of #Rama and #Siya (Sita) has a depiction of Lord Rama holding a bow and arrow and Sita holding a lotus in each hand.
♦️The top of the coin has #RamaSiya written in #Devnagari script. On the reverse, is the legend (or inscription) ‘Amardad ( name of the month ) Ilahi 50 (year)’ . The coin is the only one issued by Akbar which features a human figure.
♦️The depiction of figures, were generally barred under Mughal rule, though there were a few exceptions. (Jahangir’s coins)
🇮🇳This is MY INDIA
🇮🇳Isn’t it yours?