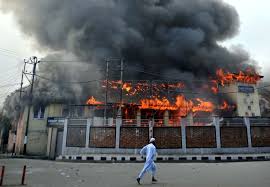 ♦️All those people like #KavitaKrishnan (and #ShehlaRashid #RanaAyyub #GurmeharKaur ) crying hoarse over hardships being faced by Kashmiris by the restrictions placed on them would also do well to answer:
♦️Where were you when over 43 schools were burnt by Paki Pimps in Srinagar who are mortally scared of education for Kashmiri children? Did you bother to interact with the students and their parents in a FACT FINDING mission then? Perhaps you are scared of educated Kashmiri children too?
♦️Where were you when SC/STs in J&K were allowed reservations only in jobs of sweepers and toilet cleaners? Did you care even once to ask the Scheduled Castes of Kashmir whether or not they would like to see the National Law on reservations for SC/STs and OBCs to be applied in Kashmir?
♦️Where were you when Kashmiri women were disinherited from their family inheritance in case they married someone from “INDIA”? Did you even once look at how a Kashmiri girl continued to keep her inheritance if she married a Pakistani but was denied the same if she married an Indian non-Kashmiri?
♦️Where were you when the then J&K Govt in 2012 stated on the floor of the House (as in J&K Assembly) that of the 438 registered Temples in Kashmir 208 had been damaged by militants? Over a 100 of these temples have been completely destroyed! There was ONLY SILENCE from you
♦️Or do you go on FACT FINDING missions only when there is the possibility of an ANTI-INDIA narrative?

Is definitely Slavic Dating A Good Idea For You?

3 Reasons Why You Should Use The Latest Android ROMs