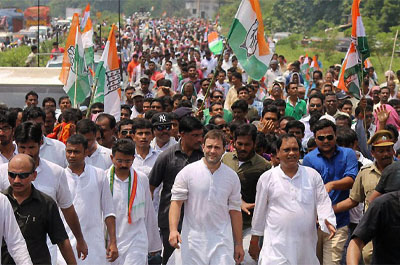 It’s CHRISTMAS for CONGRESS!
First, 80 seats against all odds in Gujarat!
Second, all 17 accused acquitted in 2G Scam
Third, Ashok Chavan exonerated by Bombay High Court in Adarsh Scam
It’s been a fabulous Holiday Season so far!
All efforts by BJP apologists to put a spin on the Gujarat numbers…stuff like 22 years of anti-incumbency and so on…cannot take anything away from the fact that Rahul Gandhi from a Pappu is on the road to becoming Pappa!
The CBI Court’s decision to acquit all seventeen accused in the horrendous 2G so-called Scam case wherein the country was supposed to have sustained a loss of ₹1,76,000/ crore has come as a Godsend for Congress
And now Ashok Chavan’s exoneration in the Adarsh Housing Scam case by the Bombay High Court is the cherry on the Christmas Pudding!
Is it enough to resurrect the Congress?
I don’t think so…
But t is enough to move the Grand Old Party from the ICU to the General Ward…
And from there recovery will depend entirely on whether or not the new President Rahul Gandhi initiates the process of rebuilding the Indian National Congress from the grassroots upwards!
The Congress’ connection with the masses will have to worked at step by step…in front of them is a colossus in the shape of Narendra Modi and the Bharatiya Janata Party!
Modi represents power, optimism, hope!
What does Rahul Gandhi represent right now?
Now there lies the problem
No one knows what Rahul Gandhi represents!
That’s the confusion that could destroy the Congress’ Great Comeback!
If Rahul Gandhi and the Congress could somehow transform themselves into messengers of hope, peace, progress and love…the BJP would be in real trouble!
And for that what do they have to do?
It’s simple really…
Read !
Read M K Gandhi , otherwise known as Mahatma Gandhi, and do what he did!
Will Rahul Gandhi lead a new Dandi March against communalism to reclaim OUR HINDUSTAN?
Do that Mr Gandhi
Maybe just maybe…the spirit of Mahatma Gandhi will bless you..
You need real GANDHIGIRI now!
Are you ready Rahul Gandhi?
India is ready!