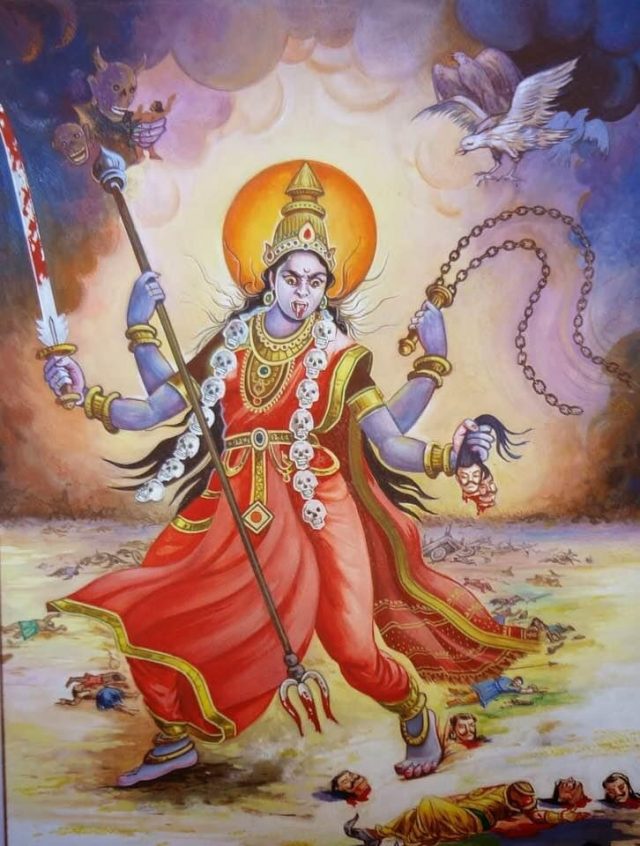 🌹JAI SIYA RAM🌹
🌺THE INCREDIBLE #ADHBUTARAMAYANA (Adhbuta; AMAZING) WHERE #SHRI_RAM PRAYS TO #MA_SITA 🌺
🌹Ma Sita’s Roopa as #Mahakali when she sees the elder brother of #Raavana #SahastraRaavan render Shri Ram unconscious with an arrow that seemed to pierce his heart!
🌹From #Valmiki’s own redux version his original work called “Adhbuta Ramayan” Shri Ram takes his Army of Vaanaras, humans, bears and others to free Pushkar where Sahastra (Thousand Headed) Raavan rules and has made Brahma his prisoner
🌹During the battle Shri Ram shoots the Brahmastra at Sahastra Raavan;,the elder brother of the now dead Demon King laughs and snaps it in two and shoots the Vaayastra at Shri Ram that hits him in the chest
🌹Seeing Shri Ram lying unconscious on the battlefield Ma Sita transforms into Mahakali ; within minutes Sahastra Raavan’s Thousand heads have been cut off and devoured. She is joined on the battlefield by howling, screaming horrific Mother Goddesses that destroy the Demon Army
🌹However Ma Sita as Mahakali carries on the dance of destruction so much so that Lord Shiva has to support the Universe before it is engulfed in flame (Shiva appears as a corpse…but that’s another story)
🌹The now released #Brahma revives Shri Ram who seems terrified of #Sita’s all destructive form; he begins chanting her praises and sings her 1008 names with folded hands
🌹All the Gods, Demi-gods, gandharvas and even the Asuras join in the chant in praise of Ma Sita as Kaali
🌹The Universe begins to burn by the heat generated from Ma Sita’s grief and then she sees Rama himself, praying to her with folded hands; still alive
♦️Seeing Shri Ram is alive Ma Sita sheds her Mahakali form and resumes her identity as Queen of Ayodhya and Shri Ram’s spouse!
♦️Pushkar having been liberated the Vaanaras return to Kishkinda, the humans to Ayodhya and the bears go back to the Himalayas
♦️Ma Sita and Shri Ram return to Ayodhya in the #PushpakaVimaana
🌹In this telling of The Ramayana (Adhbuta or Amazing) Sita OUR GODDESS is the daughter of Ravana’s wife, Mandodari.
🌹Mandodari wants to end her miserable life and drinks from a pitcher Ravana has given her, believing it to be full of poison. But the pitcher contains both milk and drops of blood
🌹The milk had been used as an offering by a childless woman to invoke the goddess of wealth and beauty, Lakshmi, hoping she would have a daughter like her (8.29).
🌹The drops of blood were gathered by Ravana from the sages in the Dandaka forest so he could conquer the whole world (8.17).
🌹Together these impregnate Mandodari with Ravana’s child, but she is afraid he will accuse her of unfaithfulness, since he has not been near her for a year (8.31-32), a nice double of the normative story where it is Sita who has to prove her fidelity.
🌹To avoid Ravana, Mandodari goes off on a pilgrimage to Kurukshetra in north India, has the child and buries it in the ground (8.33-34).
🌹Sita is thus conceived as Ravana’s daughter but emerges from the ground when king Janaka clears it with a golden plough to perform a sacrifice there (8.37-38).
🌹King Janaka brings her up, hence her name Janaki (daughter of Janaka).
🌹The audience knows she is also really a manifestation of Lakshmi, consort of Vishnu (because of Lakshmi’s power in the milk)🌹
🌹And yet she is more than all of this
🌹She is the SHAKTI of the entire Universe
🌹It is on Her that all of life depends and thrives
🌹SHE is LIFE HERSELF
🌹She is Ma Sita
🌹That’s why till just a few decades ago the greeting in all of Awadh used to be Jai Siya Ram not the more masculine and militant Jai Shri Ram
🌹JAI SIYA RAM…and May the Divine Mother Bless the Universe with joy, happiness and peace
🌹JAI SIYA RAM..and May the New Ram Mandir bring peace and prosperity back to India and the world

When Emperor Akbar Decreed “No Hanuman Bhakta To Be Harmed In The Mughal Empire”...