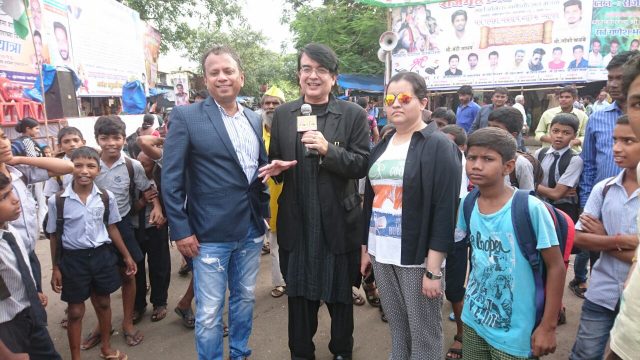 This was touted as the Mother (or was it Father) Of all scams; the BMC Road-Contractor Scam wherein there was allegedly a nexus between BMC officials and contractors to squeeze out as much money as possible from substandard roads that become pothole ridden (like badly made custard) in a matter of weeks!
As Advocate Pradeep Nambiar Ji explains someone had the brilliant idea “if roads remain in perfect condition how will we earn money on repair and rebuilding?”
Interestingly the same “suspended” contractors involved in the alleged ₹350/ crore scam are doing all the work of the BMC exactly the way they used to before “suspension “
No Contractor has been arrested yet because as the Mumbai Police’s SIT says “investigation is still going on”
Naturally that ₹350 crore has seen an exponential jump which again no one is willing to reveal…as yet!
But not for long…
And yes when Pradeep and I filed an RTI on the Road Scam and the state of The Special Investigation Team inquiring into the corruption there, we were told very nicely and politely by DCP Zone 1 Mumbai Police that “since the matter is still under investigation we can only provide you with the FIR”
And in a way they are not wrong..
However since it’s been some years since the scam broke, and it has been established that the same tainted contractors are getting the same road contracts year after year!
And the Mumbai public has been paying exorbitant amounts for roads that seem to transform into pothole filled hill tracks within week!
So where do we go from here?
The Courts can only act once the case starts
The case can start only after the chargesheet is filed
The chargesheet can be filed only after investigations are over
And investigations are likely to go on…in perpetuity!
To recap…BMC Road scam of 350 crore , FIR 166/16 filed on 27/4/16 two years have passed the directors of Construction companies have not been arrested.”The big fishes need to be caught”, said- office bearer of Investors and Consumer Guidance Society.
As per the report of BMC committee, ” a shortfall in thickness in the various crust layers was observed in most roads. Which has resulted in the non-execution of the excavation and transportation. Due to the non-execution of the crust layers as per the design, this has affected the expected design and life of the road where less thickness in the crust layers were observed,”
Budget for the Roads spent in Western Suburbs was 179 crore, in the Eastern Suburbs it was 21 crores and in the City the budgeted amount spent was 153 crores. A total of Rs 352.16 Crores were spent as mentioned in the FIR
Directors not yet arrested:
K R Construction has been struck off by MCA
1] J KUMAR INFRAPROJECTS- Jagdishkumar Madanlal Gupta, Nalin Jagdish Gupta, Kusum Gupta, Kamal Jagdish Gupta, Raghavachari Srinivasan, Ajit Singh Chatha, Padmanabh Pundrikray Vora and Ashwani Kumar
2] RPS INFRA PROJECTS: Nitin Rajmal Shah, Ketan Rajmal Shah,

Among the Charges were Fake RFI report for ” Jobs not done”, fake level sheets, fake bills submitted, Fake quality Register and Measurement books submitted.It was an organised crime, which can’t be just executed at lower levels. The Directors of these Road Construction Companies,need to be arrested, so that the “ends of justice” should be met. If “Anticipatory Bails have been granted to these Directors, the BMC and the State Government should move the Courts to revoke the bail and seek arrest of these Directors”- ICGS
This is real Rock ‘n Roll…